You may know that I took delivery of a Triumph Speed Triple recently. If you didn’t, in short, it was up there in the top 10 list of my “best of” collection in the “days” chapter under subcategory “things”. A new bike is always a grand occasion whether it be your own possibly humble but oh so personal purchase or somebody else’s raucous loud, angry hulking mass of lunacy. You can stand around for hours with a beer or favourite beverage and just stare and talk about the thing just sitting in the garage or on the porch (guys know what I mean).

I have done just that for a while now and right from the beginning when I was handed the brochure I knew without a shadow of a doubt that work must be done to this bike to make it mine. It’s not about the money changing hands to own something, it’s about the finishing touches, the signature that makes it very personal, what I mean really is customisation. With my old Bonneville as soon as it arrived I knew it was far too busy and needed a bit of stripping back, so off came the rear fender and on went a splash of paint on the rear cowl.

Good – A tidy tail is a good tail, note lack of frippery and legality

Not good – Why does the rear of the bike have to imitate what looks like the lights at a dragway? – bikeglam.com

Simple it seems is best (in most cases) so cleaning up the rear of a bike from it’s usual “factory spec” has become an industry on it’s own and they call it “Fender Delete” or “Tail Tidy”.

Without going into too much detail the following was done to the bike recently:
– Tail Tidy by R&G
– New Rizoma indicators for the rear
– Rizoma grips in gold (I don’t know why I did that but I have and it is done)
– CRG Lane Split bar-end mirrors
– Competition Werkes GP exhaust

Last night happened to be the installation night for my Werkes GP exhaust so here are some shots of the progress, starting with the removal of the seat as well as some fairing parts around the seat section.

Obligatory bird shot, because the bird gets his own chair to watch the proceedings and pass a wrench every now and then. Jade knows what he is looking for and it’s quality of workmanship 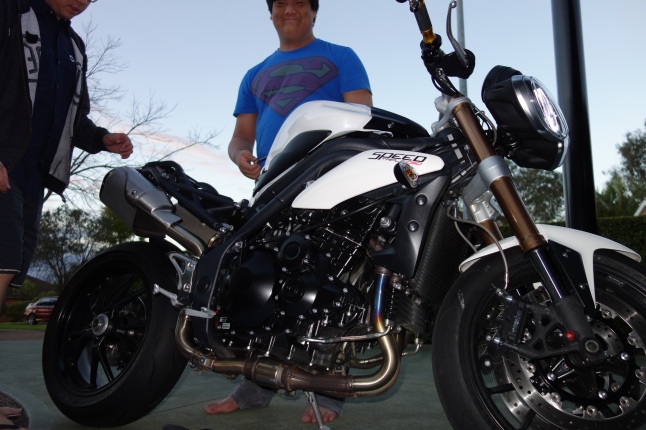 The seat if off! Woohoo, I am a legend of all things mechanical and engineering! 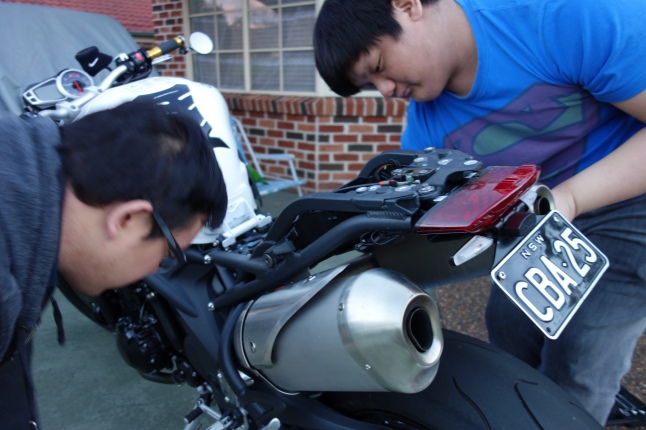 You need tools to remove the exhaust, luckily I knew where to find them. 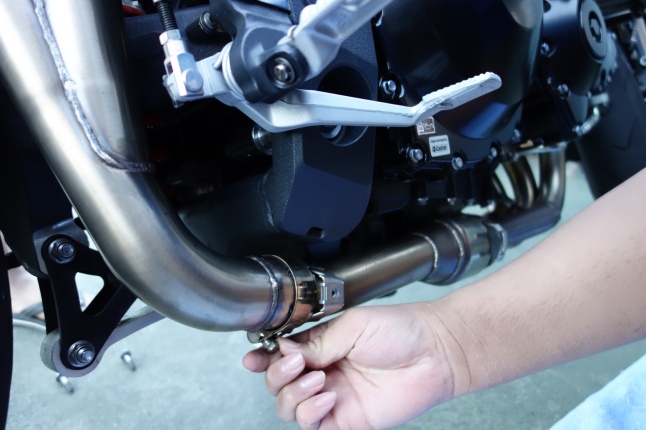 Loosening the D ring allows the mufflers to slip right off

Check out my cans, these puppies are quite heavy, so are the mufflers. Shorts are a good look in winter, it says “it’s cold but I don’t care”.

If I left the exhaust like this then I would get busted by the cops, but worse still I would lose HP! Obviously something is not connected to something else, just need to figure out what. 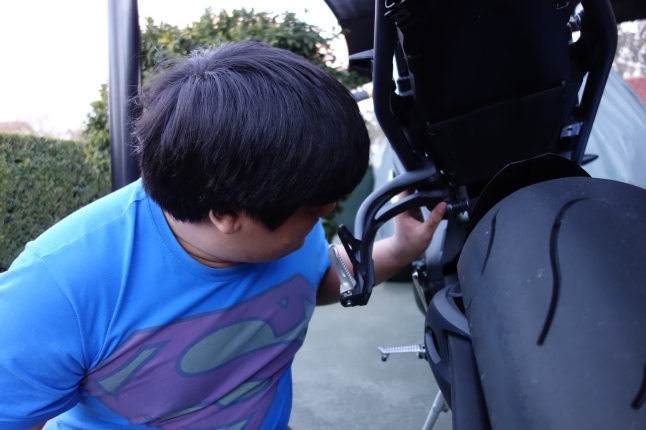 Like the pit garage at the 24 hours of LeMans – except with shorts. We toil into the night because of the shorter days in winter. This is me shoving the new muffler onto the collector, good tight fit. 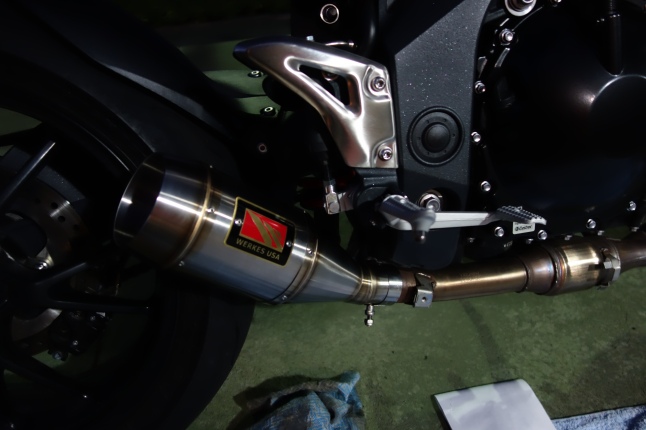 And there it is, poo chute complete and shiny, looks good in my opinion.

Running it in to allow the ECU to adapt. No revs until it has gone through a fan cycle. Sounds a little more racy, which is good because you can probably hear me coming down the road now, safety first.

Nice bum now with added cleanness, no fat because I have enough for both me and the bike.

Time for my closeup. Does my rear tyre look big in this? DB-Killer installed to avoid neighbors complaining. I start early so waking up everyone on my street – not an option.

It got dark at the end because hey, it’s winter in Sydney Australia now so really when all was done it was 5:55pm so no I didn’t spend hours on this which invariably means that you, yes you Gen-Y-ers with your soft hands used to the tapping of keys virtualised on glass or physical on plastic can also do this with your mechanical toys rather than leaving it to the workshop.

Through it all everything was off the shelf. I bought it and fitted it myself and it took time and some improvisation to make certain things work. I am no wrench-monkey/custom/chopper/fabricator extraordinaire however I have had a taste of it now… one day, a custom speed shoppe maybe? (Kok-speed, FastKoks, MotorKok, The Kok house of speed and metallic delights, KOK-Machine, A good Kok in the face, it’s endless)

That was great fun, can’t wait to see what’s next.