Not sure if I already mentioned this but Cards Against Humanity caught my eye some months back. I was probably already late on the bandwagon by then but I live in Australia so certain things aren’t big here.

Anyhow I wanted a set like a 6 year old wants chocolate (except when they are lactose intolerant). I tried Amazon however for some odd reason they wouldn’t send a pack of cards my way, all the way to Sydney Australia. Why was this so difficult, I get that certain things like games may have ratings and such that limit where a certain version can be sold however this is cards, so really?

I managed to get in with some cajoling, new friends, some enemies and 4 weeks later: 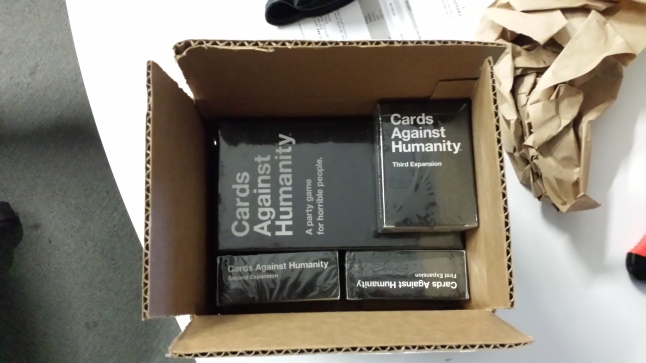 Ermahgerd – Google chrome had a spell check for “Ermagherd” and look at the parcel that just arrived!

It’s MONSTROUS I can’t wait try them out.

This could become some sort of weekly fun feature where we put the best combo’s we’ve found through gameplay. Of course we know the game isn’t exactly kid friendly so if you don’t want to see the rude/funny drivel then please feel free to avoid our new segment “Humanity Lost” or whatever we change that to.

In celebration here’s one: