GTA Online is a big deal around here, I was one of the initial players who did their darndest from the start to get online and begin my own custom virtual criminal career with my very own customised-ish character (more on that later). I’ve been through the issues with online and now that most of that is done with I can honestly say that I will never look back. It was amazing, playing through the storyline with my now bestest pixelated buddies Michael, Trevor and Franklin however it’s is really something so much more endearing and personal when you create your own online avatar and what is ultimately the downfall of the city of Los Santos, Shaun- I mean Lilith has arrived to the city of bright lights and cellulite and all criminal enterprises should be worried. I decided to play a female character as it’s nice to look at a non-masculine character on screen when you’re running around killing or just chilling on the beach. It’s so much cooler to see a kinda-fetching female (more on this too) wearing body armour and armed with an AK-74 assault rifle “whacking” guys in the kapow or “bang-bang” you’re dead… way.

I thought maybe I’d share elements from what I spent most of my time doing since starting out as a nobody and getting to “sorta-somebody” now. In the beginning:

Character Creation (“the more on this” thing)
This is a sort of weird affair of creating the appearance which is based on appearances of ultimately your grandparents. You start by a screen that looks like this:

Not my character but notice how small the grandparents are? How do I know if I like how my grandparents look? – Gamezone

I thought the process was a bit difficult to be absolutely sure you liked the look of your grandparents whose face is really small you can’t see where good genes come from. Followers of this blog might have seen my old posts about Saint’s Row 4 where I had the Boss look just like Lara Croft which (there seems to be a theme here) is a nice touch. Maybe Rockstar just wanted to mix things up a bit, I had the option to use Niko and Misty as parents too however anyone who knows Niko Bellic knows that he isn’t pretty so Lilith would have to look like Misty or nothing… so I went down the completely custom try-find-the-best-grandparents-and-parents-for-the-best-look option. I don’t do things by halves when it comes to custom characters because I’m going to have to look at this mug and body for hours on end so it damn well better look acceptable.

This is Lilith doing a selfie with a recently stolen Baller (Range Rover). I think she looks fine, nice grey leather jacket

Things I do
My mission from the beginning was to buy the most expensive apartment from the get go by being fastidious in money saving and robbing loads of stores as well as stealing and selling many cars. Doing missions was actually a side note to me as it took time to load up a mission and then drive to the location and then fight it out with some NPCs alone or with other players (more on this too). Initially the take was merely OK and I found that in the time it took for me to get a mission done I could be out earning a fair bit of cash by knocking over approx 5 small convenience stores in a row with a take of around $9K all said and done. The trick is to use a helicopter (from the heliport east of Vespucci or the airport or the Sandy Shores airfield or wherever you usually see a helicopter) to get away from the cops without having to drive on a 4-star wanted level. So you start the day by stealing a Lampadati Felon GT or a Gallivanter Baller netting you $9.5k or $9k respectively and as you can’t sell another for 24 in-game hours you just fly about robbing stores for their cash.

Ill gotten gains are then spent surprisingly easily especially because I wanted to allow for outfit changes due to the feminine nature of the character. Outfits can get expensive with a female tux jacket setting me back approx $10K, so she works hard for the threads. Other than that I’ve really been on and off with friends completing missions and races, most memorable of which was stealing a C-130 type aircraft from a hangar by gunning down loads of private security mercenaries.

Pain, so much pain… and ranting!
If I were still in kindergarten and GTA O was my education system then the comment “Does not play with others” would come up in my report card. Why that is isn’t because I’m anti-social it’s mainly because everyone else is. I recall getting out of a successful mission and immediately banking my cash out of fear of being killed with 10k in my pocket only to get killed running to my car… which is tracked for me and is pointless for anyone else to drive except myself. The d-bag who killed me decided to kill me just so he can steal my car which was a very sexy orange/yellow C63 coupe looking thing with a load of custom parts. How could he/she think that the car was a random spawn, I am not sure. I died and because of this person’s ineptitude and lost $2k to “health bills” and my car went a grand total of 50 metres before it shut itself down as it was locked… to me! (why the inbred thought it was worth someone else losing $2K just so they could drive 50m is beyond me and I hope alfaalfa-whatever your silly name is dies a lonely and painful death IRL). In another situation a friend and I just completed a mission to be foisted upon the mean streets with a crazed player running my friend over and then proceeding to try that on me from which my trigger finger responded with much squeezing and spraying into his car causing a swift retreat. Why do people assume it’s a good idea to kill other enterprising criminals, you don’t even gain much from that and all you look like is a great big twat. There is much money to be made if you work TOGETHER, but that is too difficult for these ignorant, sociopathic, small-minded loonies whom for the most part (or all of it) must be terrible at life and are failing at it miserably on a drool covered, snot-slicked, smelly, wooden, dunce stool in the basement of their probably meth-addicted mom’s hovel in semi-darkness, and I say probably because they haven’t surfaced to find out yet. Play nice, kill people in death-matches where it’s appropriate and make friends amongst the criminally minded to take down the man together.

It’s fun
I apologise for the diatribe above because it’s easy to avoid the trolls by just starting a crew or friend only server and wreak havoc like you’re the only criminal in Los Santos who’s friends pop into town every now and then to make some criminations cooperatively. The game really does come together when you have people with you in the situation too, however it’s when the objective ends is when I wonder who is going to shoot me in the back which isn’t so much a worry when you have people you can trust, stand up guys. Also forging ahead in your own story with your own way of doing things is refreshing and even if the story from the single-player side isn’t there to gel it altogether what is more tantalising is that this is your story, yes you, this is your chunk of San Andreas to carve and hewn into your own masterpiece and how you get there is your own choice.

Pursuit of Happiness/Money
It dawned on me early that there would be no point buying anything other than the best apartment. Yes most of the homes have the same interior and yes the cool 10-car garage is the same if you have a $200k or a $400k place. From that point I didn’t care for the fripperies of collecting anything except cash to make 400K for my new digs. If you bought any other place you’d only retain 50% (or something like that) of your previous place’s value as a residual on the trade to the new one. You can’t own more than one property either so it makes sense to invest initially in the one you really want and then buy that and not lose 50% of your cash just because you started at the bottom or middle of the ladder. By the time I wanted to buy and had the cash I realised that the most expensive apartment actually did not have the view nor the highest level in the building so I ended up saving $9K and purchasing the second most expensive apartment in the game therefore solidifying my wanker status. 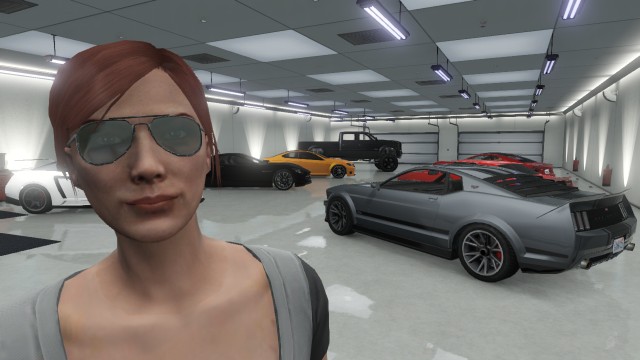 My garage last week, oh how I love this room 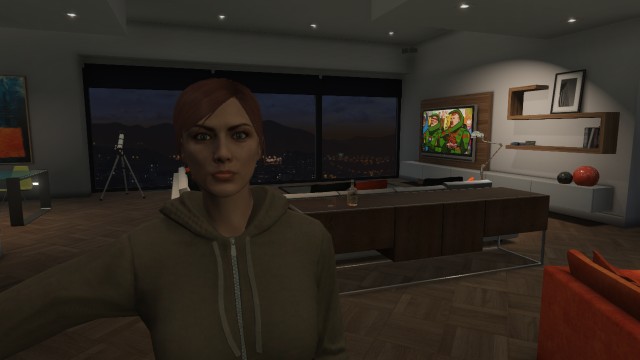 The view of Vinewood, the city is quite nice too