Usually I get creative with titles but this time around there is nothing much to say except “Dumplings!” because what more could you want when the meal itself is made up mainly of these smallish parcels of crispy, juicy meaty delightfulness. For the uninformed the humble dumpling is a wheat based pastry dough flattened to the size of a coaster that is carefully enclosed around a filling made of chicken or pork mince with egg, chinese cabbage or pak-choi (literally white vegetable) some salt and pepper. Really the whole idea is quite simple however the execution requires time to make the lot and then to cook it properly. We could embellish our dumplings with other fancy stuff like shiitake mushrooms or prawns or some fancier vegetables and maybe spices however basic flavours are best as you can vary the amount of ginger and dipping sauce you put on top to change the flavour to suit.

Recently we decided that on birthdays we would make and eat dumplings because we felt that the times in-between having dumplings was far too great and therefore unacceptable. So in the last 2 months we have had dumplings a total of 3 times and we are about to have it again (as you can see from the pictures). Trust me I and the family can’t get sick of these things, the only person I feel may be a little tired of it is my dad who has the duty of cooking it because he’s just so darn good at it. My job is to form the dumplings with my mum. The job itself is kind of tedious but you realise soon enough you’re making the stuff you’re going to eat so make many and don’t make them so they can’t stand up on their own (more explanation on that later).

Around here we love us some dumplings so I thought it would be nice to share the process a bit with some photos. I can’t give the recipe away but I think you can probably figure it out by looking.

Starts with 2kgs of lean minced pork and 3 eggs. This was overkill even for 10 people.

Pak-Choi being chopped into thin strips

Finely sliced and chopped up ginger for the dipping sauce. This stuff mixed in with vinegar, chilli and soy sauce is awesome. I don’t like ginger usually but like this and on dumplings are fantastic. 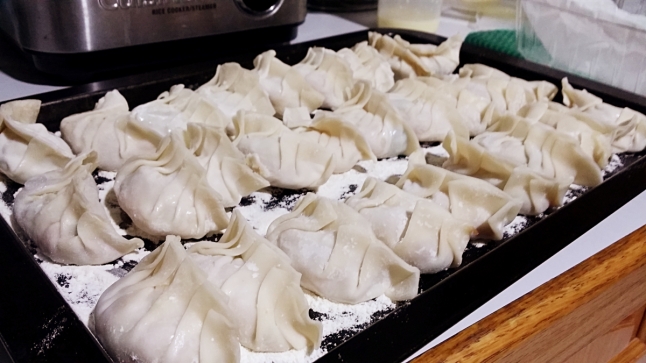 Wheat based pastry about the size of your palm enclose the meat and veg mixture in nice dumpling shaped dumplings. 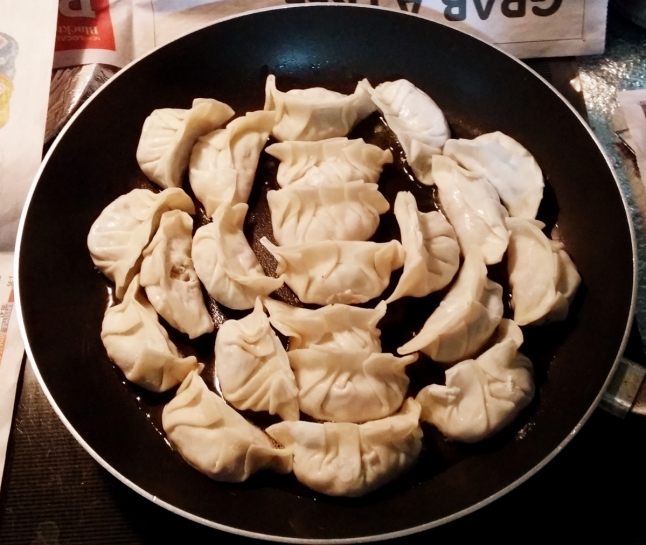 Flip them over or get them out if you just want to crisp the one side.

The finished product with both the bottom and tops crispy and delicious.