In recent years we have seen the rise of the standard military shooter they’re not all bad but they have a very similar feel some evil group is hell bent on destroying the world as we know it, by setting off all the nukes in the world or sending the US and China to war with each other. but these games have a redeeming multiplayer filled with unlocks that will set you back 200+ hours, but Wolfenstein is a different breed. 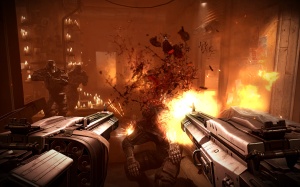 As this is a single player experience Machine games has focused all of their attention and budget on the campaign this is seen as you get two time-lines to play this leads to a game that has a good balance of exploration and epic encounters. Now the game is not classic but it gives us some old school mechanics that may feel wrong to the newer gamers but sit correctly in this style of game. 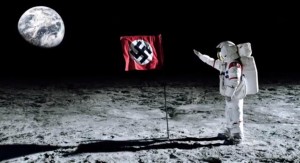 The story is interesting we have a alternate history that shows us what could have happened if the Nazis won WW2, this isn’t original but its good to go back to things that aren’t. 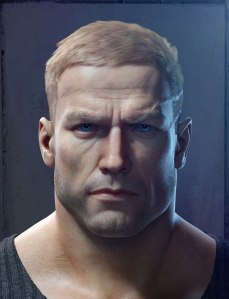 BJ Blazkowicz everyone’s favourite gun toting bad-ass returns and is given a more human feel he is no longer just a hero without feelings…but we still get to kill Nazis with no remorse and this is were the game really excels in other shooters the dialogue is strong and perfect this is complimented by amazing voice acting. 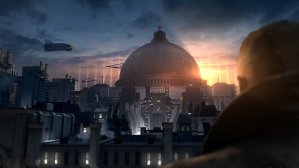 The art style is perfect for the game as everything has a slight dystopian filter and this allows the player to stay immersed in the game, now I know that Immersed is used alot but it’s true with this game I lost hours walking around exploring every little aspect. In addition the developers have rewrote songs from the 60s like ‘serfin’ USA’ becomes “Weltraum Surfen” (Space Surfing) they deffinately deserve a listen HERE. 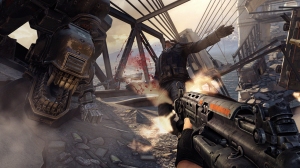 We call that thing a Panzerhund and it will scare the shit out of you.

Are they the best graphics maybe, but the game holds a incredibly stable frame rate throughout, Animations are fluid and have details that some players might not notice.

Now the game has issues obviously we have read reports of release day patches that are 7GB and graphic divers having to be updated to even get the game running but these are small technical issues and are worth the time. Its 10-12 hours campaign is dotted with cutscenes that nicely sew the sections of gun play together. With a early game choice that makes it worth playing through twice.