I like loads of different kinds of food. I hanker after a good burger, drool over juicy steaks, go all hedonist with tasty dumplings, jump amazing heights for really good bacon, do your washing and cleaning too for divine cheeses. I also absolutely love sushi so whenever I need a fallback for something other than sushi I just go get some sushi because no matter the time of day and to give me the most realistic illusion of healthy eating I simply pop down to my local sushi shop and buy a bunch of sashimi, salmon sushi, nigiri of different sorts and pop the old anti-histamine and have some soft shell crab if they have it. When I’m on trips for the office I like to eat like this because it’s familiar and reminds me of home, as well as sating my love of simplicity.

At home when it’s sushi time we usually go through copious amounts of raw un-smoked salmon, we love sashimi around our place. It is usually the focus for me, getting as much fresh, clean tasting salmon dipped in soy sauce with a little wasabi to tantalise the taste buds and stuff yourself silly. Sushi is usually made by my mum and it normally consists of cucumber, avocado, carrots, mayo, salmon or chicken wrapped in rice and toasted nori supplemented on the side with sashimi. After the last sushi night I thought we could try making our own nigiri simply because to me it seemed like a good idea at the time and I love keeping as little as possible between me and my salmon.

For those who don’t know what Nigiri is, simply put it is both a type of sushi that usually only consists of the normal sushi rice moulded by hand into a oblong shape and topped with a variant of raw or slightly seared seafood or beef… and an internet celebrity best known for sexy cosplay of popular characters from screen and video games (spelled slightly differently “Nigri”). Either way a wonderful, well formed and overall sensual thing.

Jessica Nigri on the left and Sushi Nigiri on the right. Sounds similar, other things not so similar. Either way they look good and Sushi in this instance is winning the frame war

So to making this parcel of good stuff. I have never done this before nor have I made sushi before. I have eaten it many times so the composition is familiar, the method is not. Justin and I immediately referred to the internet and watched some Anthony Bourdain’s No Reservations where he eats at a bunch of famous sushi restaurants. You can’t be an expert from watching an episode of a show but dammit we were going to try. One thing I noticed was that when these masters made their nigiri they always kept their hands doused in water. the other thing was rice vinegar for which I put probably 100ml into the whole rice pot made for 4. I can’t say I know my stuff so it was an estimate. Came out great though.

Justin on the left and Shaun forming the rice oblongs to base the nigiris on. Justin is working with scotch fillet steak and I am working with Salmon cut approx 5mm thick.

You see, not enough water on hands makes them sticky and the rice grains get stuck. We were not using sushi rice so excuse that, we were experimenting. 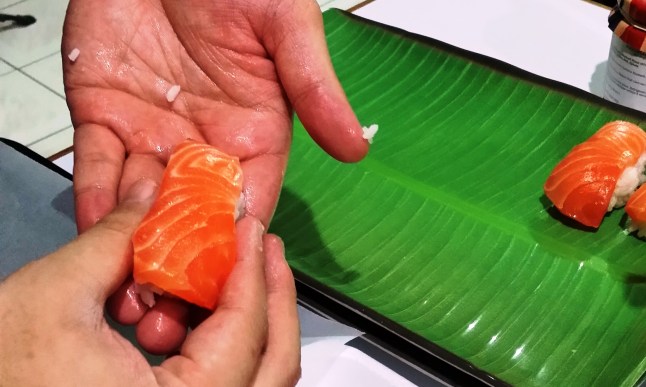 Lovely slice of salmon draped over the top. This is probably more than you should use as nigiris tend to be delicate things. i like salmon though so I indulged a bit more.

Starting out and in view of the chef’s torch. They know what’s coming

Working with beef is not as easy. You have to be very careful about how thinly you slice it. Some may protest at using a log of very nice scotch fillet to make it into tiny thin pieces but we needed sushi 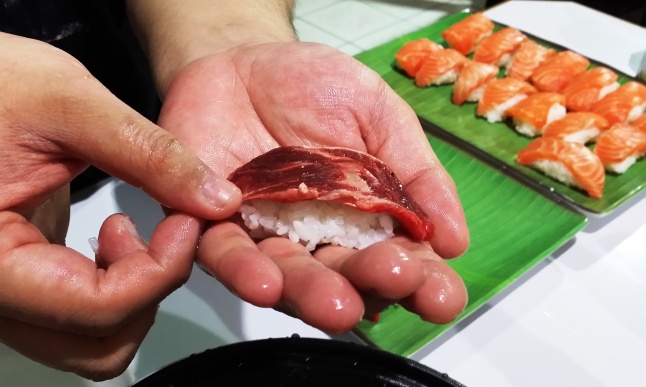 Draping some beef on a pillow of rice.

Most of the pieces had more fat than this. We didn’t mind as we were going to render it a bit

Getting there now. At this point we thought it might be best if we ate most of these salmon ones raw. We would try some in the “flamed” variety too

They look great, the colour is fantastic. I love how the beef is so dark and rich

Mum was also getting in on the show with her classic sushi nori. All the freshest ingredients; more salmon, some carrots, cucumber, avocado (always a fav) and of course rice and toasted nori

For a little creaminess and something to stick it all together we used Kewpie mayo which if you haven’t tried it you absolutely must. It makes Kraft, Praise and all the others pale by comparison. It’s smooth creamy texture and great flavour is the best. Great with chicken too. 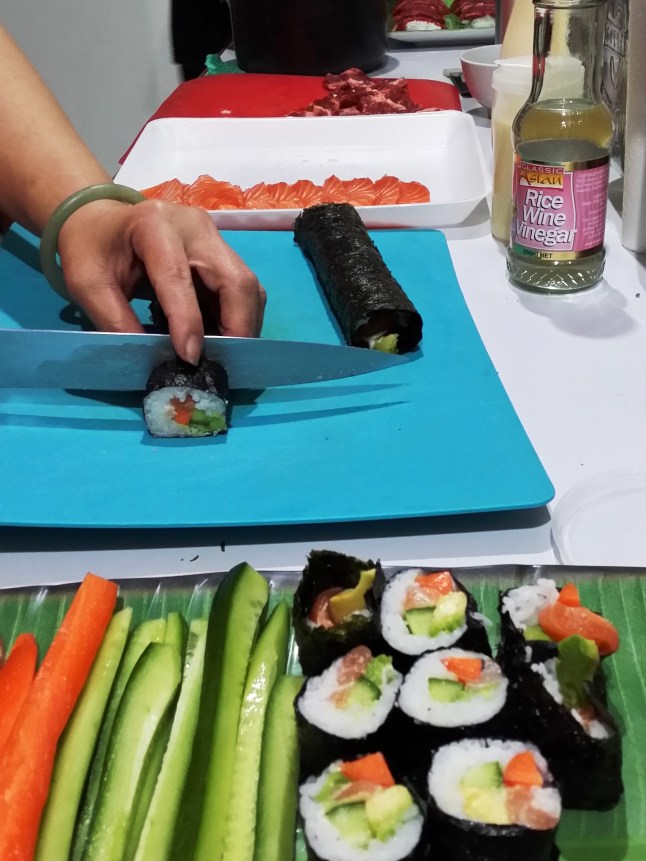 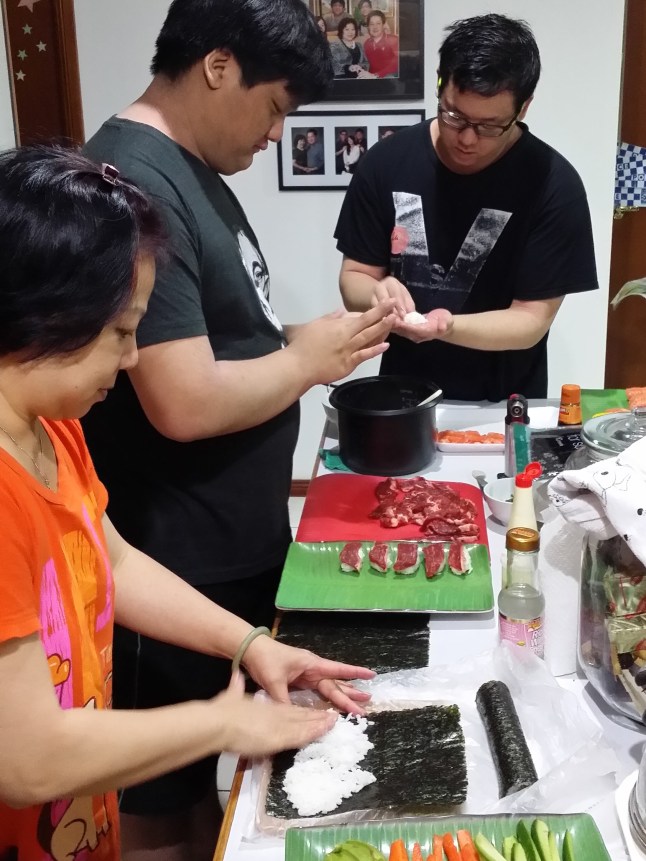 The team working that rice to make it something nice

Now Justin doesn’t eat seafood so this special bunch of beef nigiri was mostly for him and some for us. The fun part starts now because you have guys and what is essentially a blow torch. Sizzle went the steak

A fair bit of trial and error to figure out how rare or well done we wanted it. 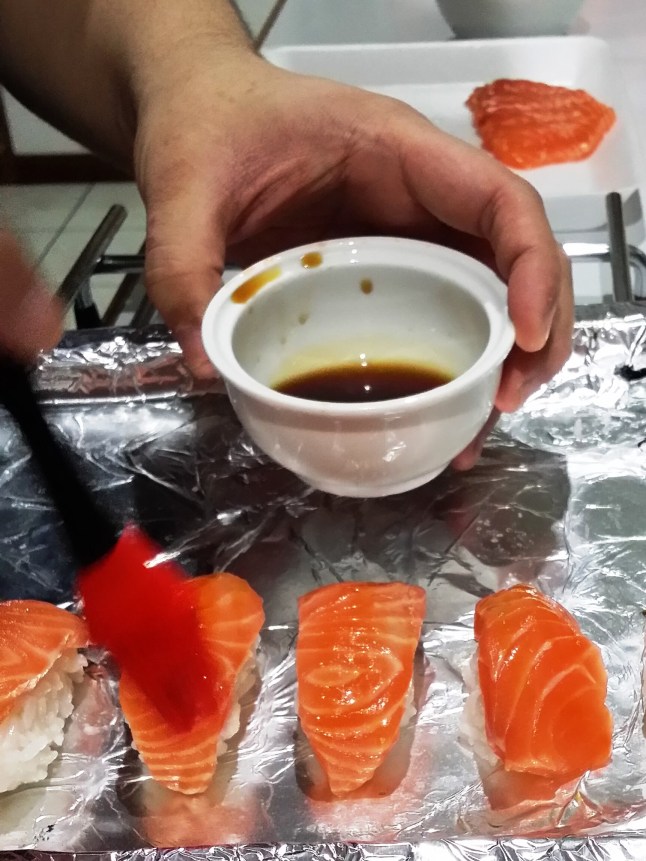 Teriyaki sauce brushed on the salmon and beef prior and after flaming. Of course this isn’t traditional but we aren’t going for complete authenticity

We did a total of 6 seared/flamed salmon nigiri as an experiment, will repeat again one day 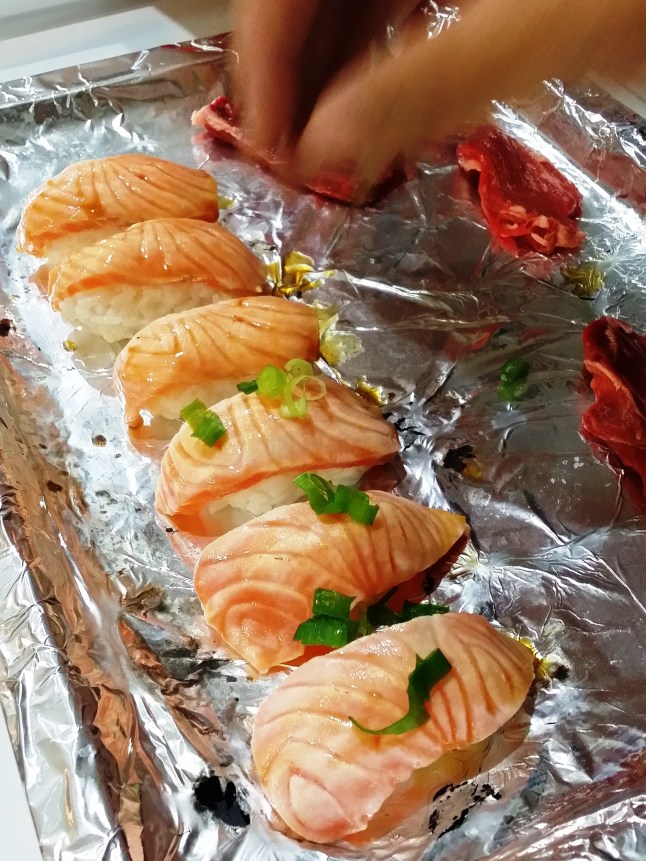 The feast. Everything here is edible I assure you. a bit of side nigiri view action there to better see the lovely thickness of that salmon

The whole lot and the Damascus Steel Kai Shun chef knife we bought to do it right. Merry, Happy Chri-bir-day!

If you think about the ingredients the nori roll is far more involved with way more put into one roll, it is efficient and fantastic. What nigiri brings to the table is a very personalised experience where each piece is made individually where there isn’t a guide instead just your fingers and the shape that makes to form it. I find it fun and quite absorbing so:

Bronze Achievement Unlocked: Made Nigiri… and it tasted fine.