Despite living in Germany and more specifically, in Stuttgart for almost 3 years, I am still discovering new places and seeing the city from different perspectives. Last week my friend took me to a place that she had also only been to once before (despite being a Stuttgarter herself!). Her friend was planning a proposal to his girlfriend at the location on her suggestion, so we thought we’d check it out together.

The Teehaus (tea house) is a building with a biergarten and a lovely lookout point, situated on a hill, right in the city. Getting there meant a short trip with the city train and a short walk up the hill. It is a bit of a tiring walk, but totally worth the effort. It’s in a park called Weissenburgpark and it’s not only a beautiful view from up top, but also a beautiful building. Before arriving at the Teehaus, you walk by a room called the Marmorsaal, or Marble Hall. As we strolled by, they were preparing the grand room for a wedding. 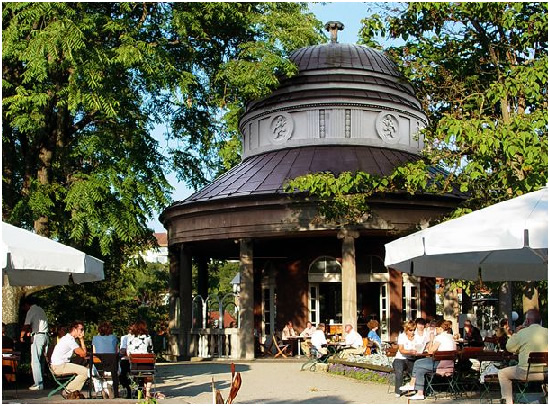 Climbing up the last flight of stairs, we arrived at the Teehaus, a pavillion that is situated on the previous site of a fortress from the middle ages, Burg Weissenburg. The Teehaus itself is built in Art Nouveau style and was a gift from a rich businessman in 1913 for his wife, so that she and her friends could enjoy tea together. The Marmorsaal was more for the men who would also play tennis in front of this room.

The view from the lookout

What we went for though, was the view. There is a lovely circular viewing platform further from the pavillion with park benches overlooking the main part of the city. From here, you have a panorama view of the city and it’s far enough that you can see a whole lot, yet close enough that you can recognise buildings that you may have already seen up close.

A great, free activity that is lesser known to tourists. Check it out on a good weather day!