Firstly I apologise for being M.I.A. lately…it was a busy last week!

I had to work a lot last week and then on Thursday we packed and flew to the UK for a family wedding.

We didn’t actually go into London itself which was actually a good thing because it would have been too stressful and busy if we had. This time round we flew into Stansted and headed to a small town called Hitchin, which is where the wedding was.

Hitchin reminded me a lot of Loughborough, which is where I spent a semester back in 2008-9. It’s not a university town like the latter, evidenced by the fact that everything was closing by the time we arrived there on Thursday night, but it’s small, quaint and has a similar selection of stores: Boots, Poundland, Iceland and markets. Also, check out their Starbucks! 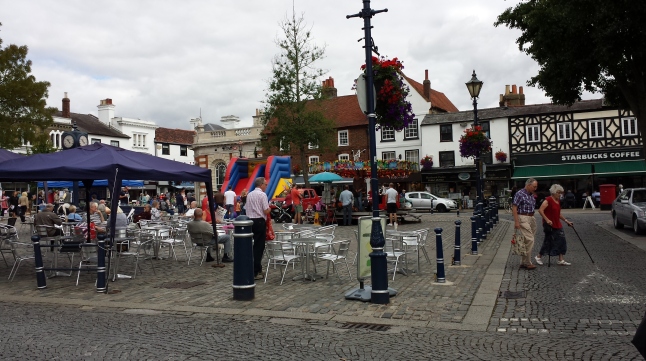 Another parallel to Loughborough was the English Breakfast that was on offer every morning!! Let’s just say that we ate breakfast and didn’t have to eat again until well after midday.

The wedding was on the Friday and it was lovely. We celebrated after the ceremony at a converted barn not too far away from the town.

Walking through the fields

The next day we went for a walk to another town (we didn’t make it, but that’s another story) and had a get together at another converted barn, but this one was the house of the parents of the groom. I find it important to meet up with the rest of the guests after a wedding…it’s a nicer way to say goodbye!

We left on Sunday evening and spent the morning in Cambridge. I’d been there before so we spent most of the time hanging out with the bride and shopping instead of seeing the sights. It’s a very picturesque town and lovely to discover.

A nice sunset to farewell England.

All in all it was a pleasant, but far too short trip. Next trip, however, is booked and partly planned. We’re heading to Paris in September!! Any tips/recommendations are welcome!