Ok, so I’m actually back in Stuttgart, but we had an amazing time in Paris with great weather and we managed to do basically everything on my extremely long list.

Sorry for being absent for a bit here, but between work and sleep, there hasn’t been much time for anything else!

Alright, so, Paris. You may have read my post about everything I wanted to accomplish while we were there. Well, we did almost everything!

Day 1 – Saturday:
The day and time (around 6am) that we wanted to leave, was also the exact time when train drivers in Stuttgart decided to have a strike, so we had an interesting morning. Our train to the main station stopped randomly at a different station, so we left, went up onto the street and caught a bus. Easy peesy. We were worried that our train to Paris would be affected, but luckily it was already waiting on the platform by the time we arrived, and seeing as it was a French train (TGV), we left and were merrily on our way. We even had 4 seats at a table just for the two of us for the entire journey. 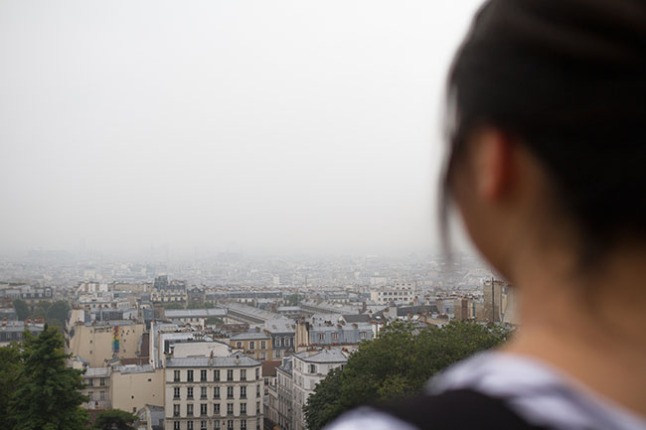 The foggy view from Sacre Coeur

We did arrive around 11ish in the morning and because we were still super early, we decided to climb Montmartre with our luggage and have a look at Sacre Coeur. It was humid so we arrived, sweaty after battling our way past African men trying to convince us to tie pieces of string on our hands and tried to take in the view. Unfortunately, due to the humidity it was also really hazy and we couldn’t see much.

Heading to our apartment on foot, we dodged semi-dried streams of urine and smeared dog excrement. I never realised how much Paris stinks when it’s not winter.

The apartment was just as described and shown on AirBnB so we were very pleased. Our host couldn’t make it on time so she sent a friend who was very lovely and gave us some tips on where the locals go, for example, to have Sunday brunch.

Afterwards we headed out to explore Montmartre and get something to eat at Café des 2 Moulins on 15 Rue Lepic, which some of you may know from the film, Amelie. The food was not overly expensive for Paris standards and it was yummy, too. I had a pastry with vegetables and Michael had a french onion soup (possibly just called onion soup there) which was quite amazing with bacon and a piece of baguette melted over with cheese, swimming in the soup. Somehow it was still crispy…

For the first time ever, we also took a free walking tour. I highly recommend it because we saw a lot of places and heard a lot of stories that we wouldn’t have otherwise seen or heard. They do ask for a donation at the end, but I think it’s fair to give them a little something for their work. Also the tour that we did used only locals as tour guides.

We took it easy on the first day seeing as we were exhausted from our travels and waking up at 4am. We got some postcards, bought some local produce and cooked in the apartment.

Day 2 – Sunday:
On Sunday we went to Centre Georges-Pompidou because it’s free every first Sunday of the month and it’s similar to the MONA in Hobart, which we found very interesting. We were a bit early so we had a croissant (they are so much better in France), checked out the nearby Stravinsky Fountain and then got in a super long queue, which was fine because we were in within minutes. The museum had some really cool and interesting installations and I would definitely recommend it if you like modern art.

Afterwards we had brunch nearby at a food market that is apparently not so well-known by tourists and frequented by Parisians, especially on a Sunday for brunch. We were still early but the food was delicious. We had some Moroccan food, couscous with chicken and vegetables and a moroccan spring roll. 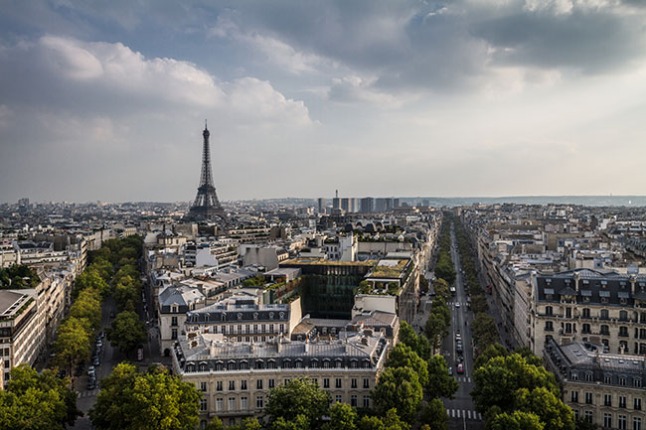 The view from Arc de Triomphe

It was a long day of walking, and we continued our journey by walking past the Louvre, through Jardin des Tuileries, Place de la Concorde and walked down the Champs-Elysees to Arc de Triomphe. Of course, along the way I stopped at Laduree to pick up 6 Macarons. 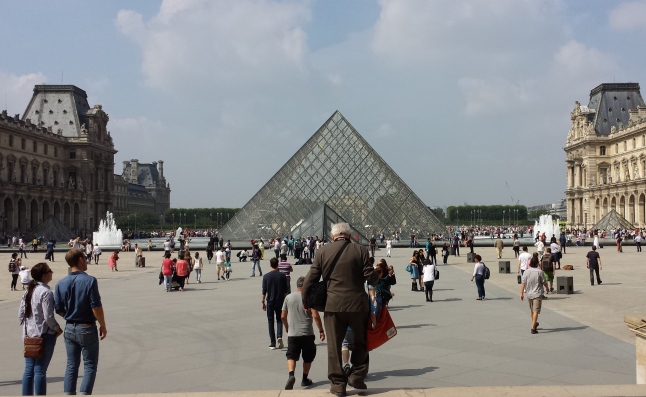 Walking by the Louvre

It was still early and I wanted to climb the Arc around sunset so we walked down to the Seine to check what time the cruises were and then walked back to the Arc. The line was surprisingly short and in no time (and many stairs) we were at the top, sweaty but content and ready to take pictures of the amazing view on a fine, sunny and clear day. 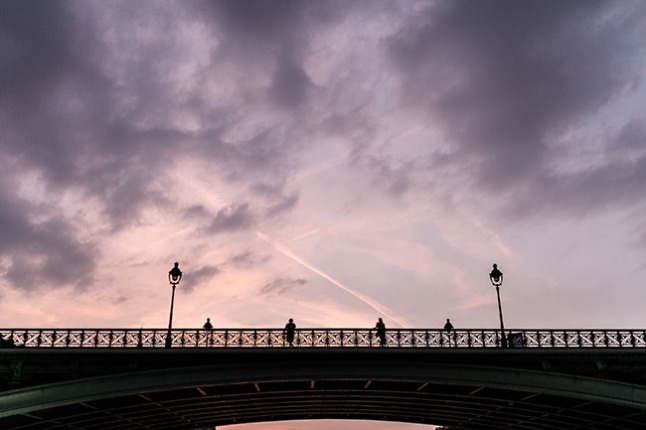 One of the many bridges (Pont) of the Seine

Afterwards, we headed down to the Seine once more, passing by Diana’s memorial on top of the tunnel where she had that fateful accident, and bought our tickets for the 8pm cruise, just in time for an 8.30pm sunset. It got a bit chilly towards the end, which I was not prepared for after such warm and sunny weather, but I didn’t mind because it was lovely. We got great seats in the middle of the boat where no one could sit in front of us and heard the tour commentary in French, German, English, Mandarin, Korean, Spanish, etc etc. Just as we were returning to the dock, the Eiffel Tower lit up behind us and everyone ooh-ed and aah-ed at it’s majesty. You really can’t take enough photos of that thing.

Day 3 – Monday:
Early in the morning we wanted to head to another museum but silly me forgot that museums are closed on Mondays, so we went all the way there and couldn’t get in. Then, we decided to get a croissant at the nearby McDonald’s because there wasn’t anything else for a decent price but they had run out of croissants. Also they didn’t serve McMuffins or anything of the sort. Great. 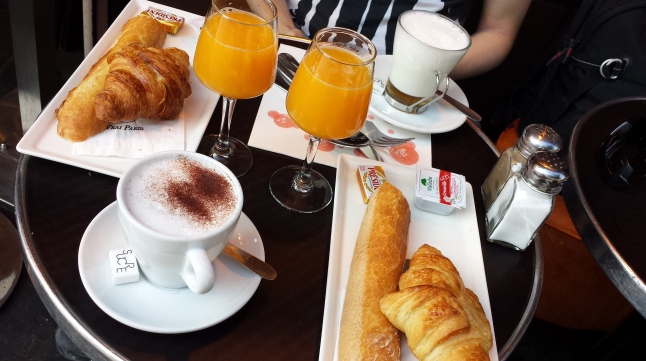 We then went to Absesses as recommended by our host’s friend and had a lovely French breakfast there. Croissant, baguette, egg and bacon with orange juice and a hot drink. The price was alright, too! This is a lovely area to relax in.

We then headed to Notre Dame for another tour, but upon arriving found out that the tour started 30mins later. Ugh. Still, we wandered about, sat down somewhere and used the free wifi to contact Amy. She was running late but would meet us after the tour. 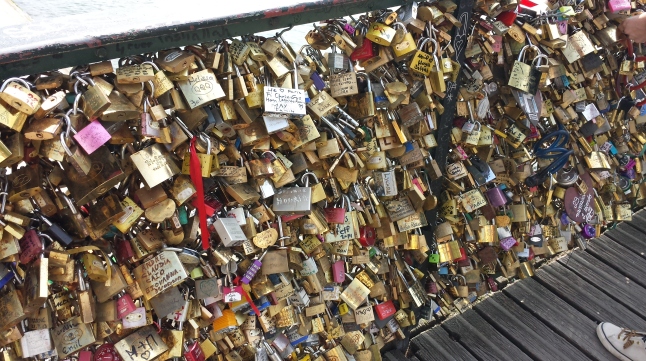 Once again, the tour was great and very informative, not only about the history of Notre Dame and the surrounding areas, but also about where to go to eat and what to see. 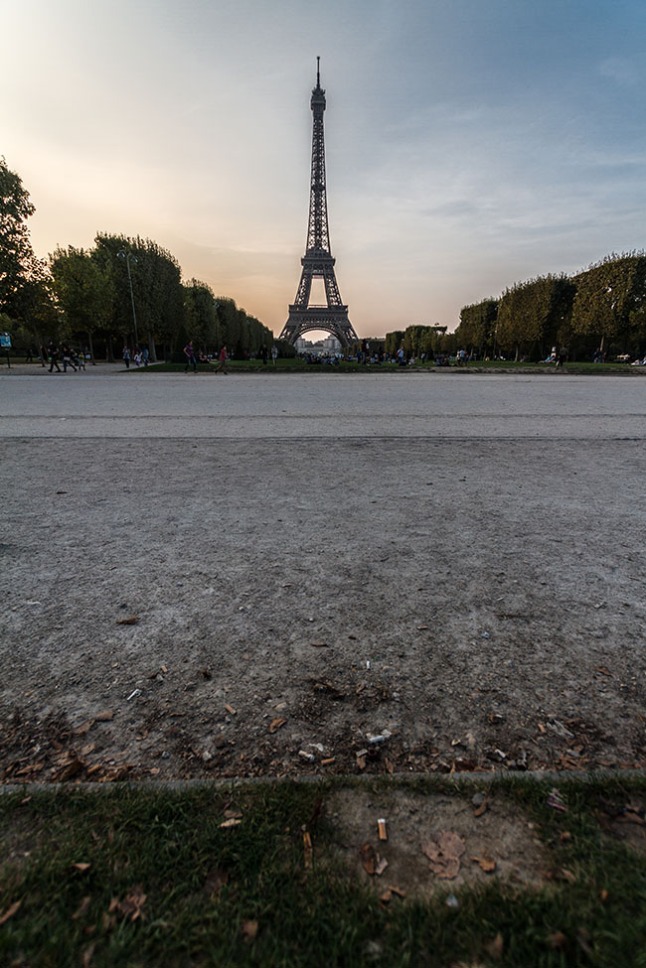 Finally, we found Amy and decided to walk to the Eiffel Tower to take some photos. Amy is also a photo enthusiast so this was perfect. We decided not to climb the tower because the views from Sacre Coeur and from the Arc de Triomphe were enough for us. We took MANY photos and had a lovely evening. For dinner we then headed back to Montmartre and dined outdoors with the Parisians, eating mussels, baguette and upon Amy’s insistence, escargot. I wasn’t going to try this because I am not that adventurous with food and don’t eat any organs or insects, etc but I gave in and tried one. It actually wasn’t that bad. I’m a fan of garlic and herbs so it tasted fine. It was a bit squishy as you would expect but it wasn’t gross. I think it was more in my head so when I thought about the fact that it was a snail, I freaked myself out.

Day 4 – Tuesday:
The next day we made a whole-day trip to Versailles where we walked to Marie Antoinette’s residence (like a small town, really) which was beautiful and checked out the castle with the help of an audio guide. We didn’t have that much time so we had to rush a bit but it was a lovely day and we saw all the main sights. 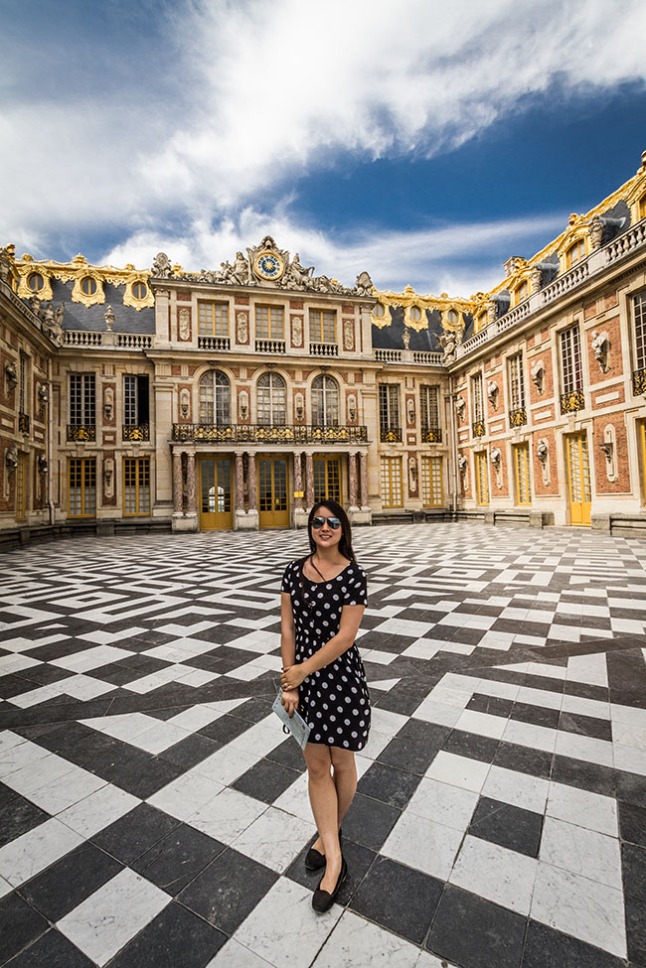 Ohai! It’s me in front of the Palace of Versailles!

I even got in for free because I am under 26 and a resident of the EU! I had to pay for entry to the gardens because they were doing a musical fountain show in the evening (which we unfortunately couldn’t stay for) but it was only 7€ (for students, 8€ for adults) which was ok. The fountains are otherwise only turned on on weekends so we didn’t get to see them in action.

As you can tell, it was a full on trip with lots of walking but it was a wonderful break and we’ve already got a list of things to do for next time! Someone recommended the Picasso Museum and we didn’t check out some of the other churches. I also definitely want to explore Ile St. Louis because they apparently have a great ice cream shop there and towards the evening it’s great for dining because there are barely any tourists around.