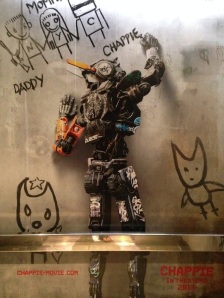 Every child comes into the world full of promise, and none more so than Chappie: he is gifted, special, a prodigy. Like any child, Chappie will come under the influence of his surroundings – some good, some bad – and he will rely on his heart and soul to find his way in the world and become his own man. But there’s one thing that makes Chappie different from anyone else: he is a robot. The first robot with the ability to think and feel for himself. His life, his story, will change the way the world looks at robots and humans forever. Check it out HERE.

Gru is recruited by an organization to stop Scarlet Overkill, a super-villain who, alongside her inventor husband Herb, hatches a plot to take over the world. Check it out HERE.

Ian Shaw seeks revenge against Dominic Toretto and his crew for the death of his brother. Check it out HERE.

A young programmer is selected to participate in a breakthrough experiment in artificial intelligence by evaluating the human qualities of a breathtaking female A.I. Check it out HERE.

When Tony Stark tries to jumpstart a dormant peacekeeping program, things go awry and it is up to The Avengers to stop the villainous Ultron from enacting his terrible plans. Check it out HERE.

Jim Bennett is a risk taker. Both an English professor and a high-stakes gambler, Bennett bets it all when he borrows from a gangster and offers his own life as collateral. Check it out HERE.