I have been a motorcyclist for 3 years now which isn’t that long I know, as I had a scooter before then for about a year. Since I got my 2-wheels moto license a friend of mine already had his and he started with a scooter too, which he has kept until now. He cites not needing anymore than what he has to get from A to B which is admirable but incredibly boring. I would probably be the most affected by his stoic belief in “what I have is enough” as we trundle, not blaze home on the commute to the suburbs.

This is how fast we go. Not pictured: Me on my bike waaaaay ahead, like way ahead. SO FAR ahead… not.

OK, I get that racing around town on the bike isn’t how you maintain a long and pain free lifestyle as evidenced by the many supersport bikes now making a living donating their bits at wreckers. Far too many believe too highly in their skill at driving and riding, I know I for one have thought it from time to time… and then I mis-shift into neutral and look like a twat revving my engine. In hindsight it was probably my buddy’s solid allegiance to his humble steed that kept me from making a mess of it in the early days. 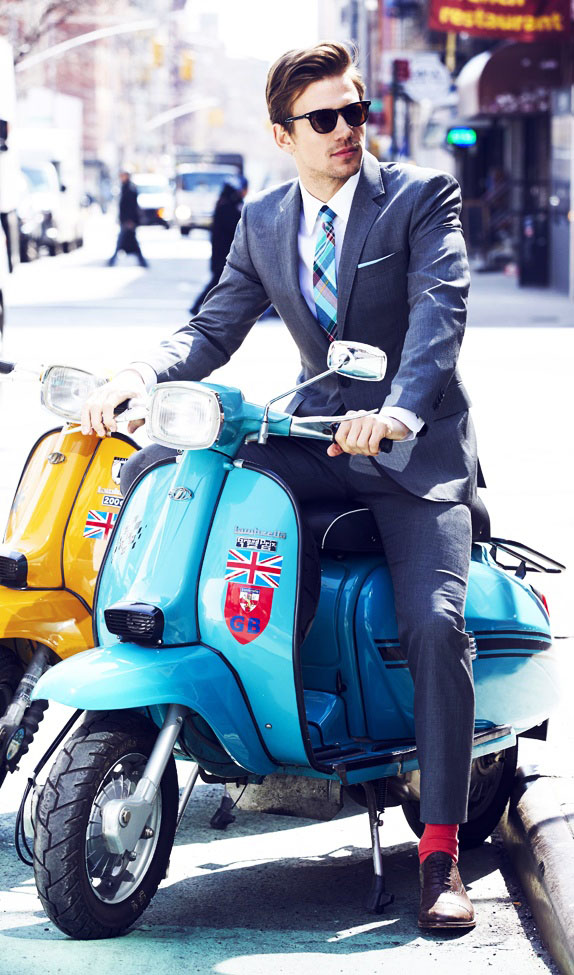 What scooter riders think they look like, nice suit by the way, very sharp

What scooter riders really look like. Nice helmet… does it come with STs?

Not so recently his scooter broke, the manifold attaching the exhaust to the 160cc engine block broke on the way to work and we spent a good 5-10 mins affixing the exhaust back on the mounting bracket with some cable ties, cotton towel and some ingenuity supplied by yours truly. This, though he didn’t guess at the time was the death knell for this long lived and far outstaying scooter. It was modified with all sorts of go faster bits and it had become family, a part of my buddy’s identity and it was broken. 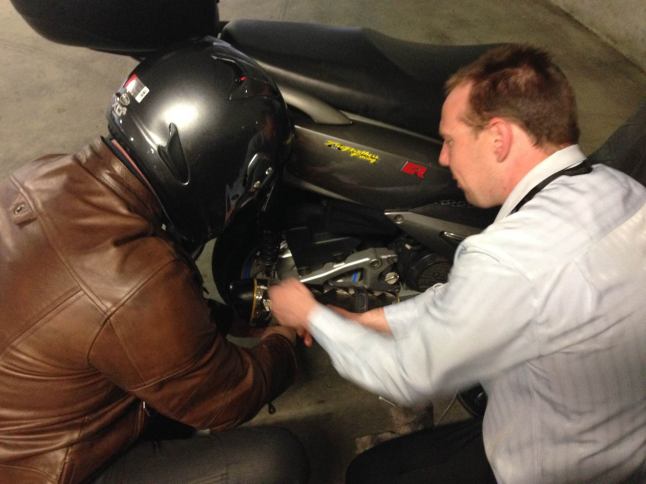 Initially there was only determination to fix this broken machine and bring it back to life. Indications were good as the engine block was reparable however further investigation found that the repair work would cost hundreds in a scooter which may only be worth as much. To a guy that loved riding on 2-wheels and who introduced me to that world this was finally, sadly acknowledged as an ending.

I worked hard to focus his attention to a replacement, something worthy and yet well priced to win over heart and mind not a scooter but the KTM Duke 390.

Probably the coolest wallpaper I could find for the Duke 390, thanks Adil

I had read many articles at the time as to what would be the best learner motorcycle. I had heard from friends that the Kawasaki Ninja 250 was too peaky requiring too many revs to really feel the pull. The Honda VTR 250 was a candidate however it was aging and my buddy didn’t find the styling appealing. There was a series of other suggestions around bigger bikes however a budget would be a major focus. He wasn’t sure of how it would be to ride a bike requiring manual intervention for gears therefore outlay until this sorcery was understood would be… reasonable.

As soon as I sent him the link for the KTM Duke 390 over IM the response was immediate and surprising. The loud orange paint job and wacky decals won over immediately, he was hooked as this was the only bike he wanted. The price was important too as we found out that the drive away price would be just north of $8,000.00 minus any optional parts.

Soon I was getting links from him on youtube videos about optional exhausts for the Duke 390 as he was no stranger to getting out the socket wrench and screwdriver and taking them to his machines. He disliked the stock sound and wanted the Akrapovic muffler bad. Concerns still lingered about if he wanted to spend that much or if he could even ride the bike. I assured him that I was also in the same position once, buying a Triumph Bonneville not knowing how to ride, getting help from another buddy of mine and then learning myself. It was time, he was convinced.

I wrassled another biker buddy of ours to join us and we booked ourselves in for a test ride on a Saturday. As if the heavens were with us, the day we chose was beset on both sides by scorchers and that Saturday would be a balmy 26 degrees celsius rather than 30+ degrees. When we arrived we acknowledged that he had not taken on any training in manual since his learners test and I would take the “burden” of riding the bike to figure it out. I am not sure what it is about the signing of a document that says my excess is $3000 that makes me not want to be particularly foolish while testing the bike, I made my way carefully pushing the bike only where it was acceptable to do so. 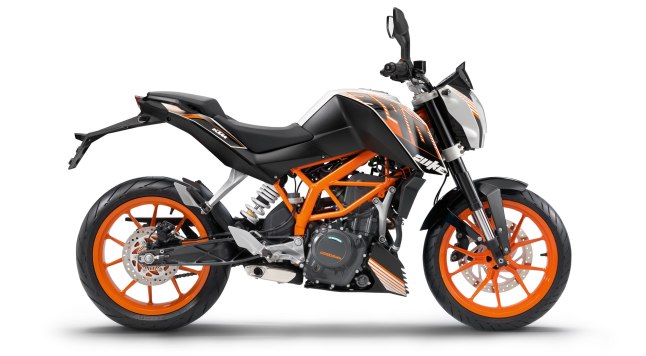 The KTM Duke 390 is a sharply designed bike with angular slashes and exposed trellis frame giving it the unmistakable silhouette of the KTM Duke family, it looks good. It is outfitted with the standard WP suspension (though sprung to suit the smaller 390) as per the Duke family lineup. ABS is standard and wholly capable of pulling up the capability of the 373cc single cylinder motor producing 32kW. The numbers don’t mean much though unless you ride it and I got the chance to do that.

Around town (I didn’t get the chance to take it on a highway) it was a breeze to ride. It made me think of a bike you might borrow from a friend who lived on a tropical island as it was so easy to access, throw about and get your feet on the ground. Distance from pelvis to handlebar is short therefore I would think that transitioning from scooter to the KTM would be easy as scooters too have short reaches to the controls. Short controls in turn also mean handling the bike in tight spaces around town is also simplified as you aren’t making either arm reach out much further than they have to. What was unlike a lackadaisical tropical island borrow was the power delivery. The engine was smooth and torquey making it a doddle to get off the line with an easy clutch action, further enhancing a new rider’s experience. For comparison I rode a Ducati Monster 659 some time ago and came away underwhelmed at the lack of revs and shaken by the idle vibrations. The KTM Duke 390 suffered none of this.

Criticisms are limited to the sound of the KTM which is very much scooter like in fact echoing the scooter it is replacing for my buddy as well as the seat which feels like it is sliding you forward to the tank. The seat could be a little bit more padded as well to ease the time in the saddle which is remedied most likely with the “Ergo Seat” on offer in the KTM PowerParts catalogue however it begs the question, why didn’t they just make that standard? My buddy also had some time looking and sitting on the bike and he was impressed by the dimensions and styling in person however he commented that the grips were rather cheap feeling and let the bike down and that the seat too was uncomfortable and needed replacing.

We ended the day by visiting the parts shop of our local KTM dealer and bought ourselves some KTM merchandise in the form of fitted caps for each and a 1:10 scale KTM Duke 390 for him as well as a KTM SuperDuke 1290 for me (another story for another time).

KTM SuperDuke 1290: Staring at this picture puts hair on your chest