Well, now im super late making my first post of 2016 now rather then the January/February mark that I wanted but hey better late than never. But for now lets ignore that and get on to the fun stuff. Since I last posted we went to Germany for Steph and Michael’s wedding I’ll let her tell you about that though.

In January we started Archery probably the only sport that I have ever enjoyed, I never did archery in school the teachers believing us to be to irresponsible and dangerous, me and Shaun chose to go the easy route of picking up the compound bow a fast and powerful way to jump in to the winners circle without the need for extra training we jumped high and fast every weekend earning a higher handicap a great way to be filled with confidence. Mum and dad chose recurve bows that were more elegant than the crude compound bows that me and my brother started with. 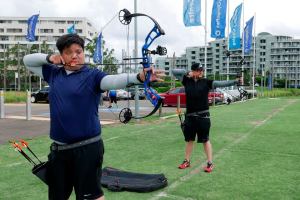 But our hunting bow of choice the Bear Cruiser was no longer good enough we needed something faster and designed for target shooting dad put me in touch with a friend who was willing to sell us his old bow for a good price not knowing who he was I was sceptical at first but the bow ended up being a Hoyt pro comp elite all though being superseded it was the top bow for 2014, we were soon asked to join our coaches indoor practice shooting became a whole different ball game, shooting the gold every time was a given but now technique was where it was at soon talks of competing every weekend became what do you want to train on this week. 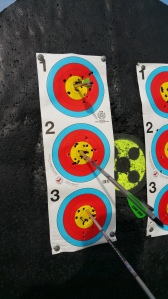 In April I turned 20 and Steph and Michael came to Sydney, we took a short trip to Auckland to see some of the sites, eat some amazing pizza and take lots and lots of photos.

That’s about it at the moment we have a competition coming up soon so we will be training for that, but the team should be getting back into the swing of writing again.