Last Saturday was spectacular, it almost felt like spring was here. Birds singing in trees, no clouds in the sky, sun shining down on our sunburnt nation and the smell of… octane, Why? It’s because Toyota Australia invited 250 of their most dedicated fans to bring their car back to the mothership (in Australia anyway). The car in question is the Toyota 86 and what was great was that if you owned a BRZ or an original AE86, you were invited too. Also in attendance was Beau Yates, Neil Bates and Tetsuya Tada, chief engineer on the 86 project. How did I, Shaun Kok get into such an event on account of I don’t have an 86 you might ask? Well my buddy Lee happens to have purchased an 86 and recently at that.

For the attendees free food, drink and entertainment were abound and plenty of Toyota 86s to take your fancy and make you thoroughly bored with the idea I am sure, although I love cars so this was somewhat a boon for me. I went not hungry, thirsty or lacking in sights and sounds for the whole day so without further ado, I know you, came to see pictures because words are poignant but secretly we are all kids impatient for the “Where’s Wally” picturebook.

My friend Lee who recently took delivery of a grey 86 GTS, he’s the reason why I, your intrepid blogger got to go in the first place.

Lined up for entry to Toyota-land. It seemed like some amusement park entry, this was Toyota, one of the biggest car companies in the world. 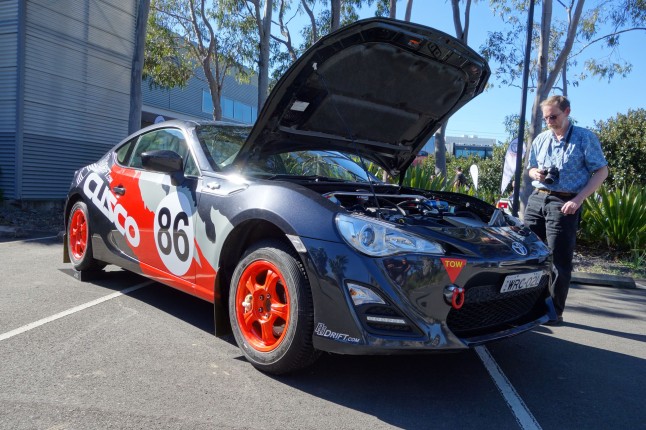 First thing I saw when I got in was this seemingly rally spec Cusco race car, looked pretty serious, not sure about the wheels.

Ok the RX100 camera wasn’t exactly pro however this thing looked very streetable, once again, not sure about the wheels, but to each his own.

Even though the wheels were iffy the engine bay certainly was not, swathes of carbon fibre with some lovely aluminium braces

Work wheels look the business and Pikachu probably couldn’t find a more solid wheel to attempt to hide behind. 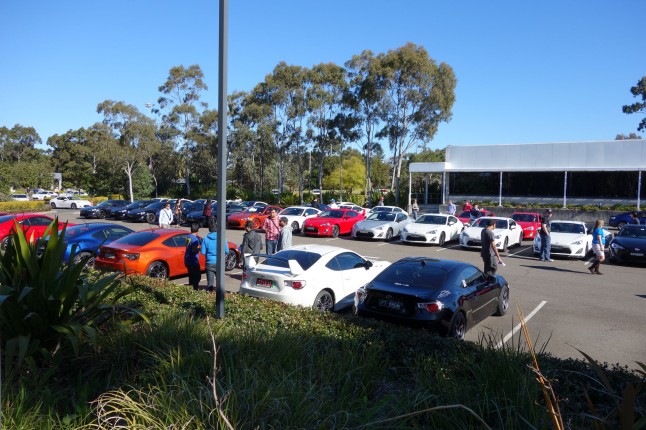 An 86 shortage you say, I have to wait 6-7 months before mine arrives eh? Actually there was around 10 of these car parks just loaded with 86s, BRZs and AE86s

I believe NSW 86/BRZ club was there in force, this is one of their rather serious looking rides.

Looks the business, check out the interior below

Alcantara for incontinence on the dash – check. Carbon fibre in place of speedo and other related and just as important dials – check. Seats, solid like rock – check. It’s a race car.

Many people, all here for the love of the number 86 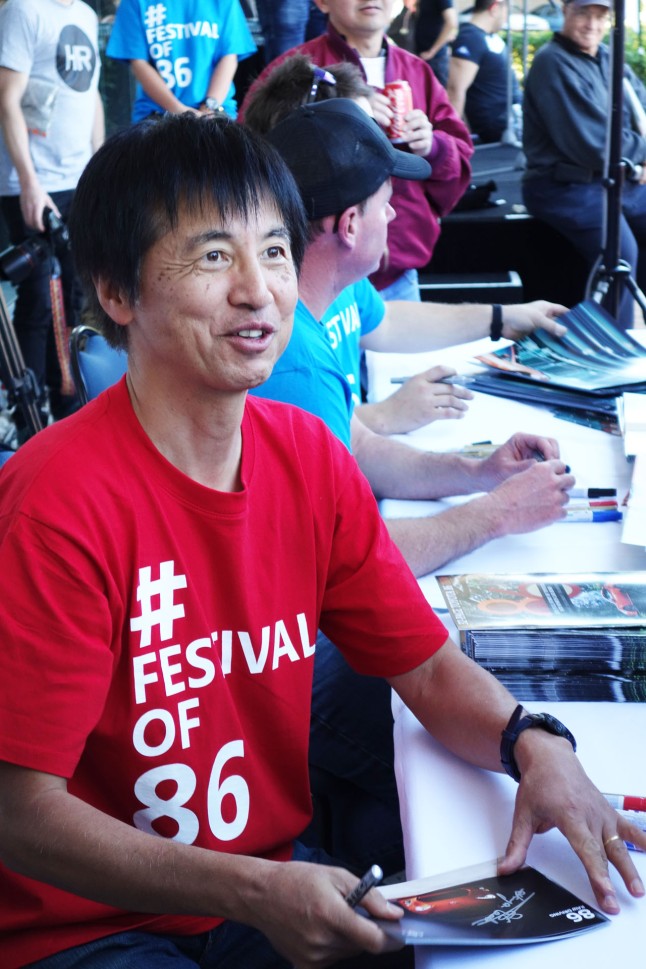 Tetsuya Tada signing autographs for virtually the whole time we were there. This man is a signing and engineering machine! He was so gracious, shaking hands with everyone who lined up for ages. A rockstar in the owners eyes, I bet he’s just a regular guy who loves to engineer great cars. Wonder what he’ll do next? I can’t imagine anything could be as exciting as “Project FT-86”

A recipe for success or RSI, either way with a queue like this.

Mysterious (to me anyway) racecar with the Rocket Bunny/GReddy wide body kit. Got to see and touch the kit up close. Avid readers may have heard that I wanted to do this to an 86 but I cancelled on the car *sigh*. 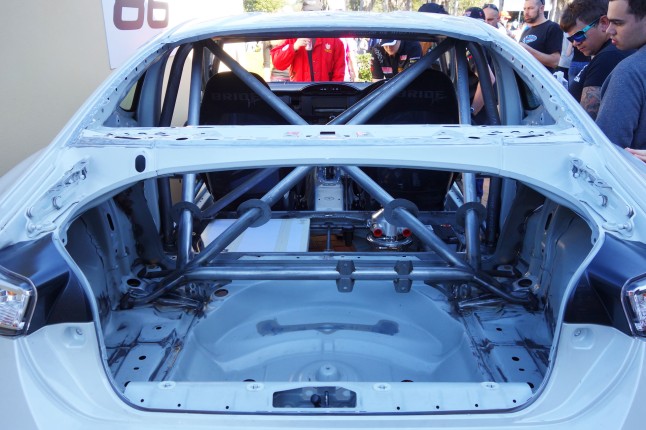 The roll cage is a custom job, looks the part and I am sure, doesn’t come with warranty. Son, do you know how fast you were going, where your bootlid is, what happened to all the windows in your car?

Nice embellishment on the custom frame 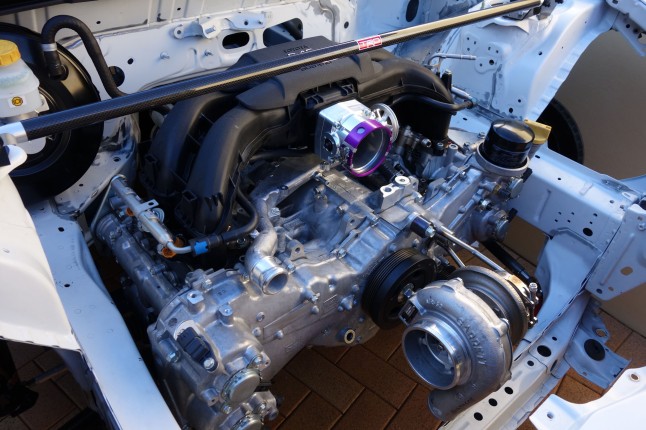 One for the Dr. Who fans 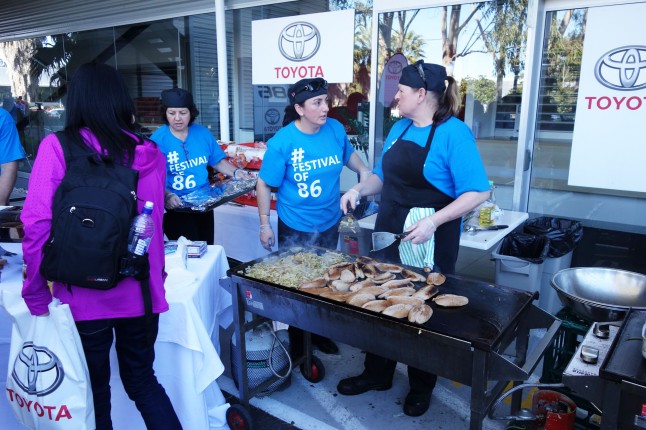 Free food. As my brother and fellow blogger said “I’m a slut for free food”, thinking on that, who isn’t?

There were many sausages there of varying colour and shape. This one was mine. Ed – That sounds wrong.

This BRZ was cooler than the rest, it had many STI badges on it. 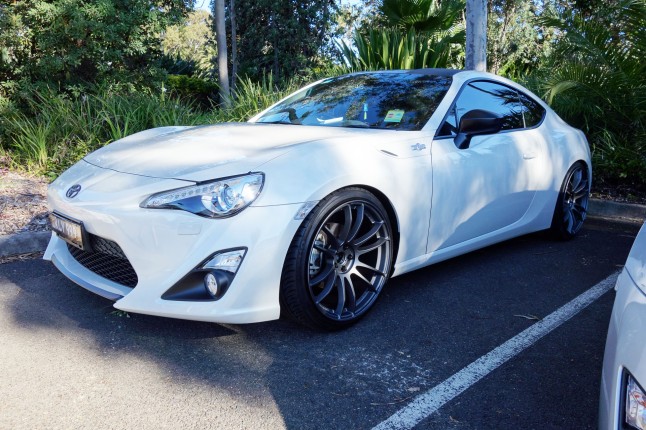 Kelly has a cool car, love the Volks. 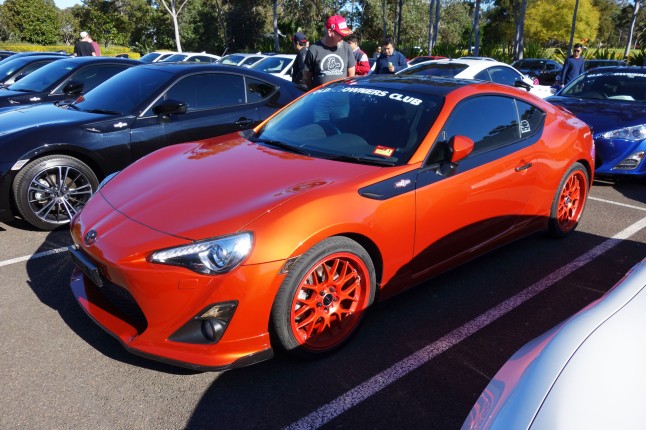 Queensland represent! Agent 86 likes some vinyling, I concur, on the vinyl front. 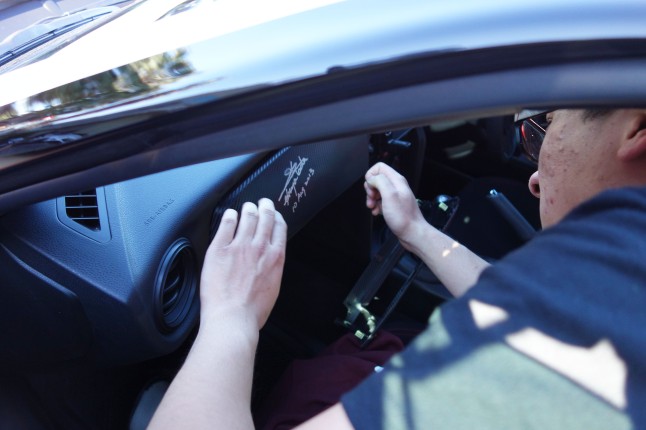 This young man just had his dash panel signed by Tada-San. Proud moment no doubt. Seemed to be a trend that day.

(L to R) Beau Yates, Neil Bates and a guy I am sure I should know but I don’t.

So close to the front of the queue! You can smell the permanent marker fumes.

Lee is shaking the hand of the man who engineered his car, rare moment. Can you say that you shook the hand of your car’s chief engineer. For the most of us, no. 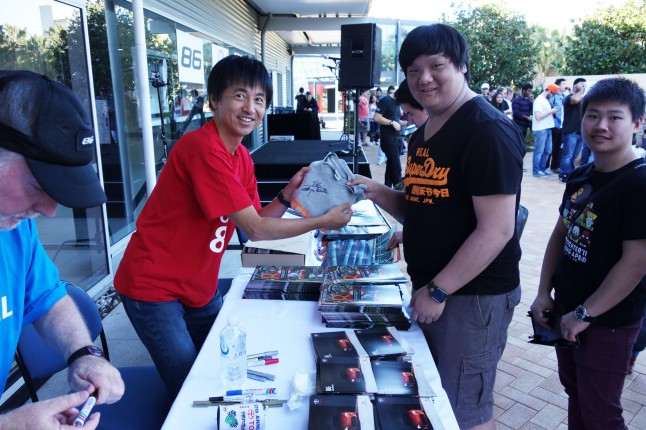 Justin just got his free #Festivalof86 shirt signed, that ones i going up in the man-cave. 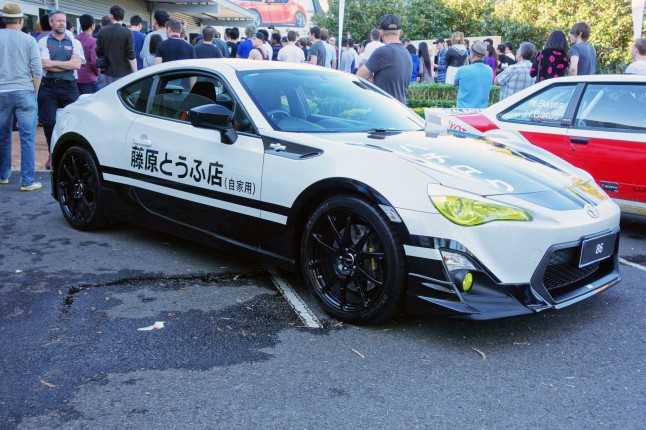 Neil Bates had a cool Initial D 86 GT on show, his own personal ride. Race drivers don’t need satnav but they do need Motec’s dash logger.

The best of the breeds. 86 looks angrier and fangier somehow. Both are screaming at each other for stealing the show.

Here’s an interesting AE86, all tough, old-school-ey just like the usual fare right?

Actually it has a Nissan engine, sneaky fella got Yokohama’s finest into a Toyota festival. 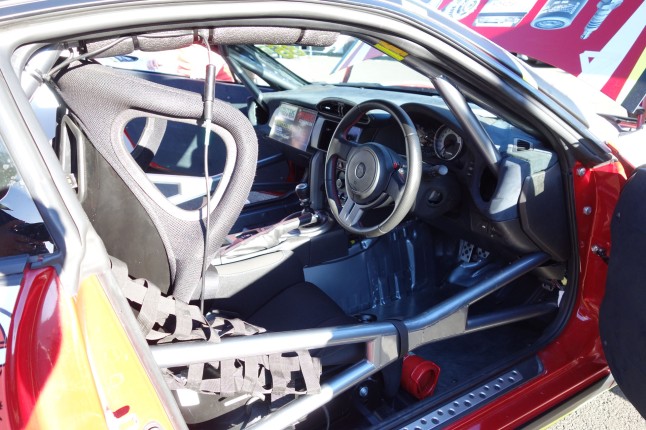 Extended fuel tank for racing. Good for mileage, not good for luggage space. 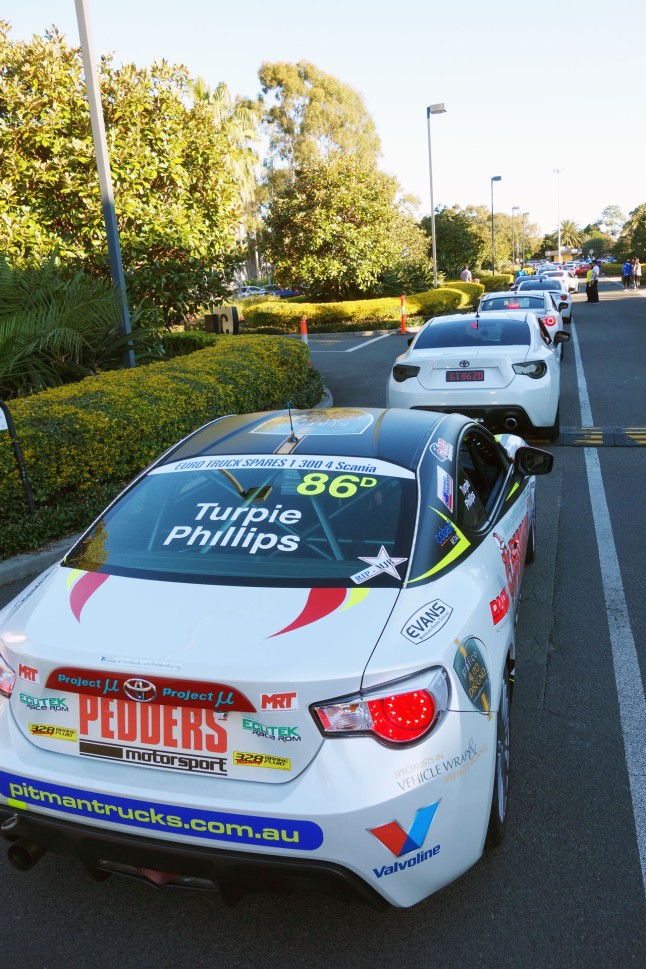 Queuing for the big driveway photo. 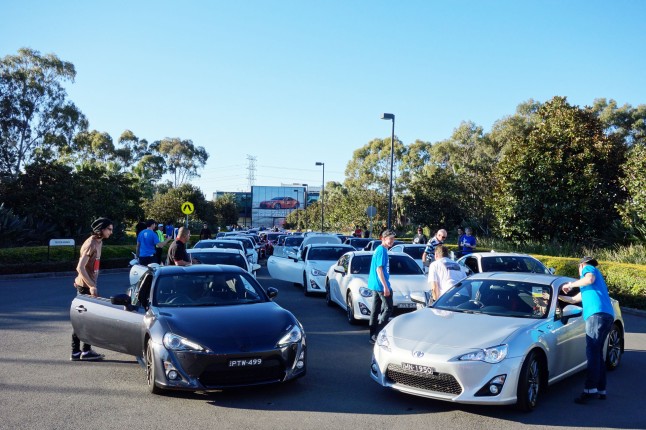 Everyone out of your car!

The man himself, Tada-San with his many creations.

The “Oh what a feeling” shot, they messed it up a couple of times. Tada-San decided enough jumping on account of his shoulder. He is an engineer after all. 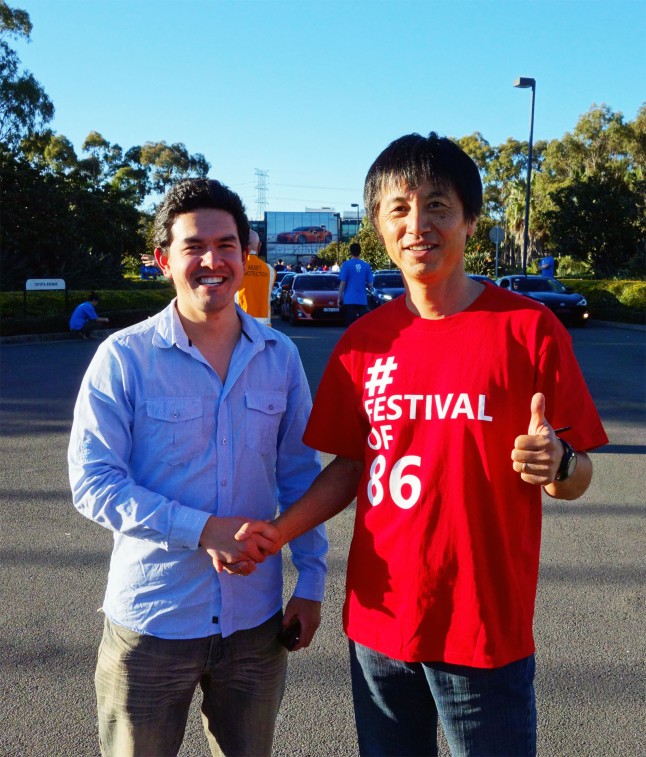 The AllStars crew have put on another gathering of like-minded car aficionados. This time the key was “Stance”.

Not political, it’s about how your car sits. Does it sit like it’s got a stilt up it’s keister or does it sit like it’s taking a dump on the pavement? If you said “hell yeah” to the second option then you belong in the stanced crowd and you should have brought your car down like these people.

Toyota Aristo, VIP style, I don’t see much of this in Sydney. Makes sense because this dude had Victoria plates.

Not alone, that’s for sure, much more hotness here

Something so right about E30 Bimmers, this one was very clean, love the wheels, must take around an hour to wash those… each. 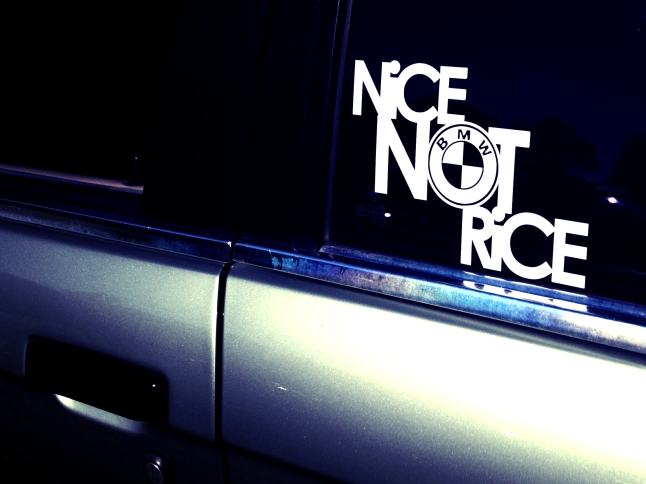 On another BMW – I am a fan of the marque, please enjoy this wallpaper 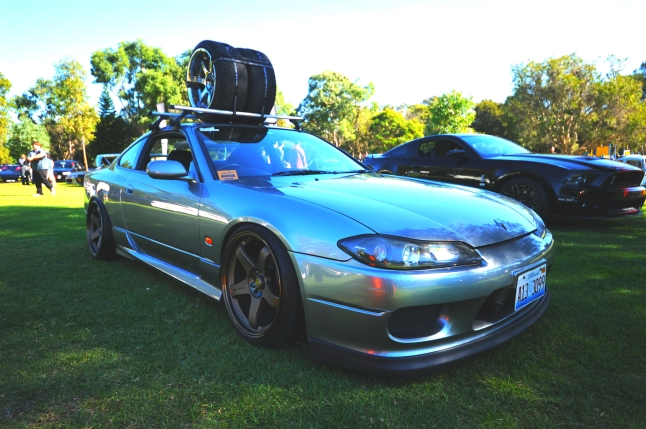 Nismo wheels on this very sorted looking S15, you know they’re serious when they carry spares… for punctures of course. 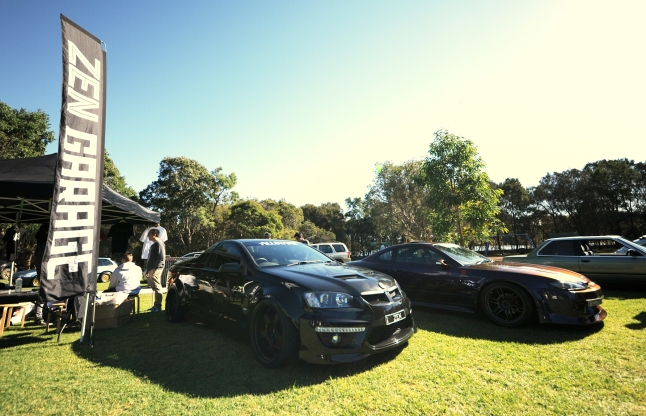 The Zen Garage stand and rides of the Capozzi kind.

This S15 had something to say…

…Worked much?
S15: I just met you and this is crazy but here’s my number so call me maybe.

Panorama of the “B side”. If your car doesn’t officially qualify for “super stance” then you parked here as hard as you could. Having said that some cars here were pretty awesome.

Cable ties and steelies, why… 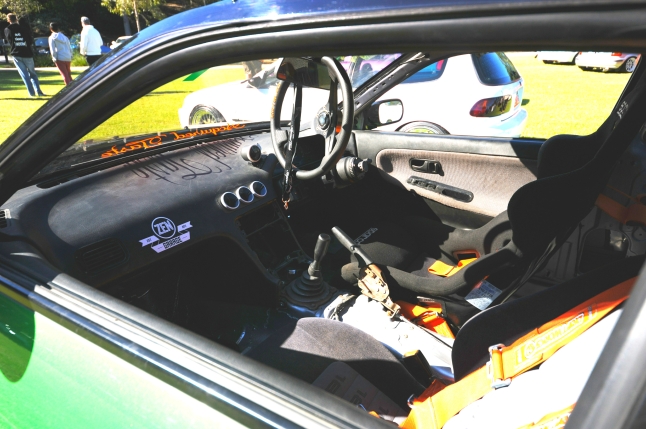 … because Race Car that’s why and I love this.

This S13 looks like it comes straight from the Touge runs in Japan. Take a look at the dish on the rims. 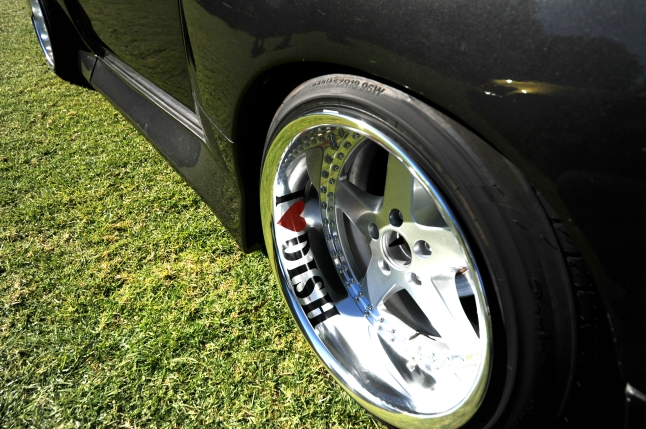 We know you do honey

This was on the MPS so I made a wallpaper for it. Owner must be picky and sick of the scraping

No school like the old school Work Meisters. 5 spokes is enough, clean Civic too.

I like a good E30, this one is a regular and the stickers are great. I dunno about dialling Tracy Grimshaw on a phone though

My Dad had the 4-Door version of this car. You know 4-doors for more…

Old Corolla, on the back it had a “ToyoGlide” badge. I love the stance too

Great day all around, warm enough and very clear, we get pretty good weather around here

There are alternate views on what car mods mean. Did you know you can get that rust going with pee? mightycarmods told me so. 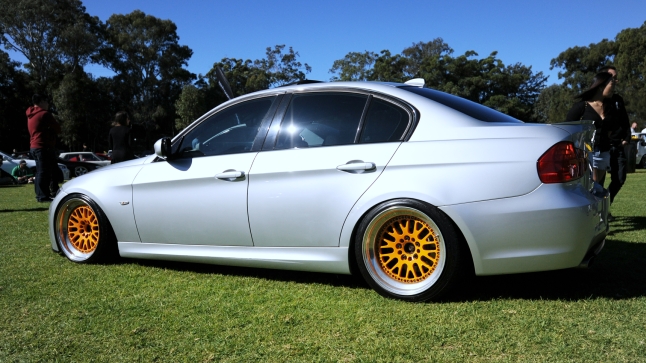 BMR crew out with their very vivid E90 3-Series. Orange is kewl 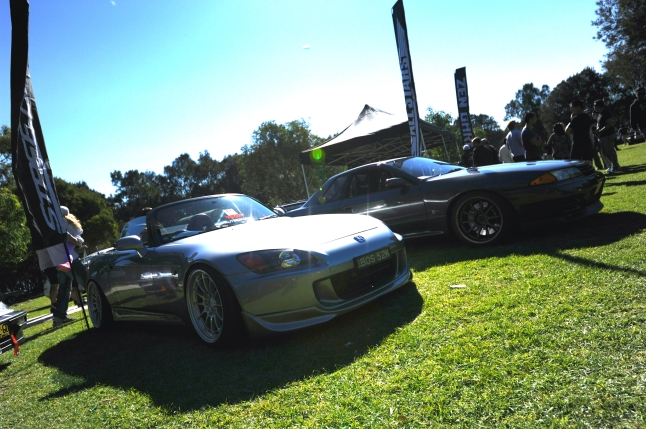 I like your Enkeis, your cars are pretty cool too. Simple is best. You can make most cars look even better with some really nice wheels, these guys know it

Work Meisters: Flexible application, don’t matter what you drive. I’m just glad either of them aren’t on Dolce’s because I have seen that before and it’s… not good.

We were leaving around lunch time and some low riders were coming through, caught one in the act. Shadows didn’t help us but now it’s all nostalgic like those instagram photos. So pretty… the picture. The dudes were like tough and balling or something, hopefully not blue-balling. 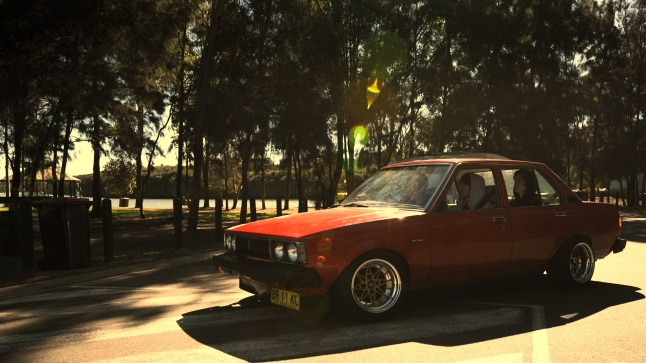 Tidy 80’s Corolla, these things are coming back, it’s like Datsun 510 all over again.

Even the AllStars ez-go got stance so you don’t have any excuse not to. Sergio one of the masters of ceremony showing us how they do it, AllStars style

Thanks guys, nice showing and keep it up.

I am in the process of getting my hands on a Toyota 86 (pronounced “Eight-Six” but sometimes i get lazy and say “eighty-six”) or GT-86 for the europeans or Scion FR-S in the USA. We got the Japanese market name so it’s very JDM for us Australians. The model I am going for could be misconstrued as the top-of-the-line-and-I-won’t-modify-it version which is wrong because this one has confort access and sat nav standard so that is two less things I need to be worried about getting or can’t live without from my current 1M.

A few ideas floating in my head about what I want to do to the 86:
– Matt khaki green vinyl on the entire car except roof. Then same vinyl on the dashboard trim
– High gloss black roof
– Work Meister S1R wheels in charcoal with polished lip (single step)
– Coilovers to lower the car maybe an inch
– Rocket Bunny widebody kit, keep it in matt black
– CF hood, nothing fancy, might even vinyl it in same military green.
– Brembo big brake kit
– HKS Exhaust system

Anyone else thinking about an 86? If you are tell me about what you want to do with it.