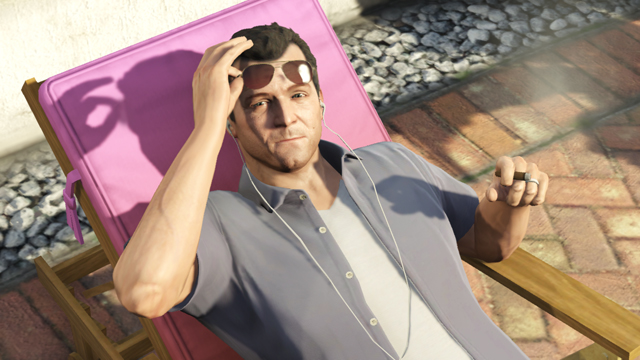 That will be me, minus the 20+ years of sun and plus some Clooney

If you are reading this then you, like me are waiting anxiously for the release of the much hyped, much loved game in the line of the one of the greatest most storied franchises in the history all thumbstick and keyboard history. In some ways it’s a chance at a vacation to LA except it’s Los Santos and people are going to be trying to kill me.

I will admit that there is some paranoia in my mind for tomorrow when the doors open and I am allowed to pick up my copy of GTA V. Why? Well I could get mugged, I’m not some muscle dude with a penchant for beat-em-ups IRL. I like puppies, small kittens and motorcycle accidents when I watch youtube, ASMR videos are also great, straight up violence is reserved purely for the virtual world.

But who cares about that stuff because what do we know about the game for sure?

– It’s set in Los Santos and the game map can fit Liberty City (GTA IV) as well as all of the map from GTA: SA
– 3 protagonists, 3 different points of view to get you grounded in all aspects, from glitz and glamour to the hoods to the stix, quickly and without using just the linear storyline to take you there.
– Modifiable cars – More than that you can purchase cars and own them, you can retrieve cars from the impound lot if lost (destroyed?).
– Customisable weapons – Guns are not lost after death which is handy
– The Almighty Dollar – Not just cars but homes and planes can be bought and stored, think Test Drive Unlimited with more freedom to do even more
– Mission Customisation – Not only can you plan and execute missions/heists according to your choice, you can play the characters you want to play during the mission. 3 different perspectives. What I am not entirely sure of is whether the perspectives can be forced, can I play just Michael during the whole mission?
– Better car physics – GTA IV wasn’t to everyone’s taste last time around, I for one did not mind it although I remember loading it up back in 2008 to find that I had no idea why cars were so weird to drive versus the lo-fi GTA: SA which was actually fun. Cars handle more arcade racer like for a better experience because driving is great and a part of GTA V but it’s not everything so why not make it fun?
– Side Missions – A lot of them, diving, hunting, racing (always), extreme sports, triathlons (returning from SA), bounty hunting the list is quite long.
– Television – GTA IV had some TV on the… TV (in game) but it was just a footnote. It seems that the player’s actions could be recorded to be played back in a television bulletin or a “Cops” style TV show. I was watching the TV spots on the GTA V website and I was blown away at the production quality and attention to detail that went into what would generally be a throw away side note, may now genuinely be a fantastic component of the game. Do crime, go home at the end of the day after being chased by the cops to review all the carnage and chaos on the news!
– Checkpoint mid-mission saves – So you don’t have to replay the whole mission again if you fail just like TBOGT
– Inside house can see outside house – Interiors are a big deal in GTA V with shop fronts and homes/apartments having an uninterrupted view of the outside, possibly (finally) even seamless transition.
– There is a car that looks like an Aston Martin DB5 – you can pretend to be James Bond in LA
– Animals make an appearance under the section of things that can you can hunt or be hunted by. Franklin has a dog which is great because COD Ghosts also has dogs and that is a big deal for the COD universe (lol).
– Missions are replayable – Fantastic, you now have 3 different perspectives and endless iterations of that to play again and again.
– Rockstar have almost deliberately setup the PS4 and XBox One launches to fail as everyone will still be playing GTA V and GTA Online and won’t be bothered with anything else.

Tonight on Los Santos’ Most Wanted

Things that are hinted but not confirmed:
– GTA Online hints at the possibility that San Fierro and Las Venturas might make a return in the “constantly expanding world” (fingers crossed!)
– You can change the clothing of the 3 protagonists however it doesn’t seem to be possible for the haircut as it might detract from the trademark look.
– GTA Online player characters seem to not have a voice hence “That was awkward”
– Seasons – Postcards on the official page appear to have landmarks in different seasons, could the game run through different seasons?
– Want to buy a house in a nice neighborhood? Cause a lot of destruction and chaos in the place where you want to buy and drive house prices down so you can buy on the cheap and then cause chaos in another neighborhood to take the heat off your county to let prices go back up again. Same goes for shares except cause destruction for the entities linked to the company i.e. securavans, airplanes, offices and branches.
– Grove St is back and bigger (Thanks to Carl) – Everyone is wearing green in Franklin’s intro video. Purple features too, so the Front Yard Ballas might also be making a return as Franklin’s enemies. 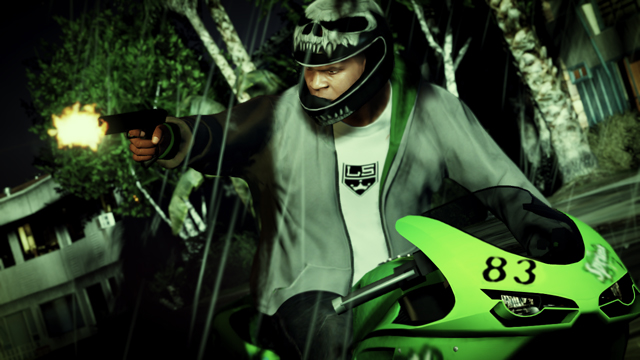 Things I am hoping for:
– Meet characters from the older series in LS – I love the idea of meeting Niko, Carl, Tommy or Claude again and not just for some passing scene but a whole mission maybe and seeing how they developed after their storyline ended in the previous game? We embodied the characters for a short time, want to see them again for old times sake.
– The other 2 cities from San Andreas later on with possibly more storyline for the main game. Doubtful on more main story addition as the end of a GTA usually comes with a finality

Things I am wondering:
– How would a purchase of an apartment work when you are on your own 16 player server? What if someone bought the same apartment on another server and then joined you on yours? Would you own the same place or would you magically warp to another level on the same apartment. Assuming the outside could see inside (i.e. the kidnap mission from the gameplay trailer). Would there be a problem with dual ownership and locations on the building?
– When you steal a car can you then respray it and then “register” it so you own it properly?
– Would money earned in the SP missions be used in the MP world?
– Does wearing the hat from the collectors edition, while playing the game automatically make you a big baller and does the Playstation Eye/Kinect see that and make you a level 100 badass in the game? (ok maybe not)